Ranking the Top-5 Eagles’ receivers of the last 20 years 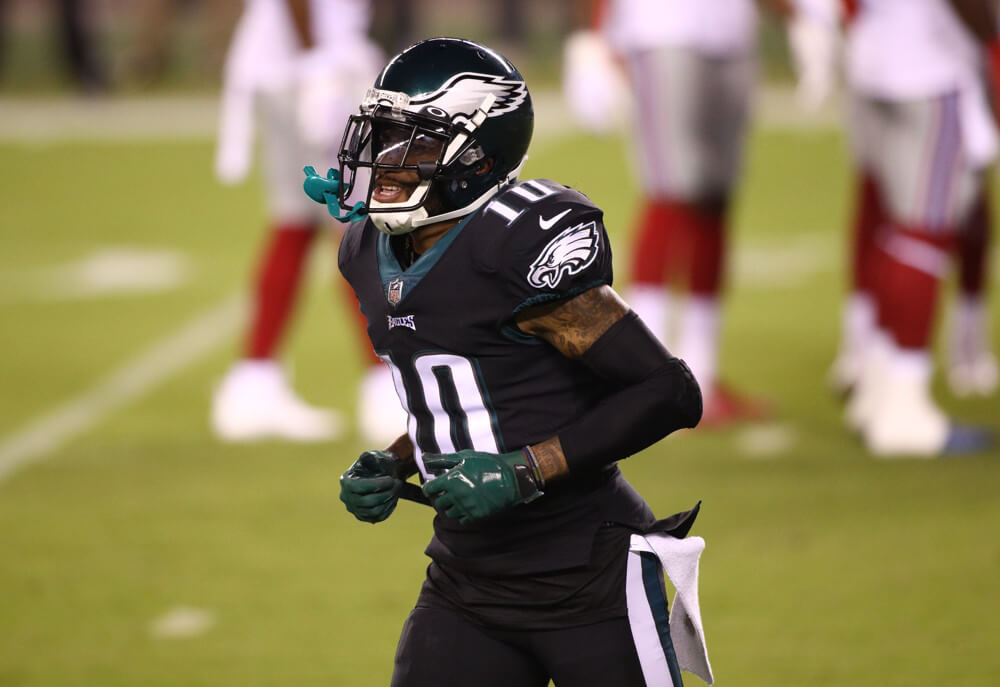 PHILADELPHIA, PA – OCTOBER 22: Philadelphia Eagles Wide Receiver DeSean Jackson (10) walks off the field in the first half during the game between the New York Giants and Philadelphia Eagles on October 22, 2020 at Lincoln Financial Field in Philadelphia, PA. (Photo by Kyle Ross/Icon Sportswire)

The Eagles don’t have another scheduled practice until the end of July, free agency seems to have ended for the club, and barring any unforeseen shocking news, we won’t hear from the team for at least a month.

So while we have some down-time, it’s time to grade out the best Eagles at each position over the last two decades.

The Philadelphia Eagles have been one of the winningest teams in football over the last 20 years with two Super Bowl appearances, one title, and six conference title appearances and a number of division titles.

With top players at every position it’s now time to look at the top five wide receivers of the last two decades.

As underrated a player as you could find, Avant became a fan favorite later on in his NFL career. In eight seasons with the Eagles, Avant recorded close to 300 catches for 3,600 yards and 12 touchdowns.

A sure-handed target who could block well, Avant did all the little things right and was a big reason for the team’s success in the late 2000’s and early 2010’s.

A 4th round pick in 2006, Avant had pressure on him almost immediately to help replace the numbers left by Terrell Owens and he was as solid a receiver as you could find.

A great combination of size, speed and hands, Maclin was the best #2 receiver in football for the better part of the early 2010’s.

In five years with the Eagles, Maclin recorded over 300 catches, just under 5,000 yards and 36 touchdowns.

Injuries ended up derailing his career, but Maclin also showed the ability to be a number one wideout in Philadelphia in 2014. 85 catches, 1,300 yards and 10 touchdowns, Maclin replaced DeSean Jackson’s numbers extremely well and could have continued to have a great career in Philly.

Still, Maclin might be one of the biggest “what-ifs” in Eagles history.

All debate on the 2018 playoff game in New Orleans aside, Alshon Jeffery had one of the biggest impacts to an offense the Eagles franchise has seen in just one year.

After years of missing on top wideouts in free agency and the draft, the Eagles paired their second year quarterback with Jeffery. Jeffery had issues with injuries towards the end of his Chicago days, but came to Philadelphia as the first true top targets since T.O.

Jeffery did not disappoint either.

In 2017, Jeffery caught 57 passes for 789 yards and nine touchdowns. While the numbers don’t stand out, his impact helped get the best out of Nelson Agholor and Torrey Smith. The Eagles offense became a top five unit with Jeffery.

His best moments though came in the playoffs. In the 2017 NFC Championship game, Jeffery caught five passes for 85 yards and two scores.

In Super Bowl LII, Jeffery made one of the best catches in Super Bowl history that caused the Patriots to change their defensive strategy early on and opened the game for other players.

Numbers don’t tell the whole story of Jeffery’s career in Philadelphia. While his final years were not pretty, the impact he had on the team and city were extremely important.

It always brings me great sadness when talking about Terrell Owens and his time in Philadelphia.

Still, his impact in the year and a half with the Eagles was one of the greatest runs by a player in Eagle history. After three consecutive conference title losses, the Eagles swung big and paired T.O. with MVP candidate, Donovan McNabb.

The franchise quarterback had his best season, and Owens had one of his best years as well. 77 catches, 1,200 yards and an Eagles record, 14 touchdowns in just 14 games. The hall-of-famer ended up missing the playoff run due to a broken leg but played in the Super Bowl.

We all know how it ended though. A contract dispute, an ugly argument with McNabb that still hasn’t ended and Owens left Philly for Dallas. It breaks every Eagles fan heart to think about if McNabb and Owens could just get along because they were the best 1-2 combo he fans had ever seen.

But what could have been…

The Eagles had big, strong receivers like Jeffery and Owens.

They had quality possession receivers like Maclin and Avant.

Eight years in Philadelphia. Over 350 catches, over 6,500 yards and 35 touchdowns. Jackson also has broken the NFL record books catching the most touchdowns of over 60 yards and 80 yards.

The greatest deep-threat weapon, Jackson also was a dependable returner as well. He collected four punt-return touchdowns in the early stage of his career.

In terms of overall longevity, dynamic play, and his ability to beat you in so many ways, Jackson is deserving of the top receiver on the Eagles over the last 20 years.

It’s still a shame the Eagles had Jackson, Maclin and McCoy before they hit their prime, and a renegade coach decided that he had seen enough from them all.