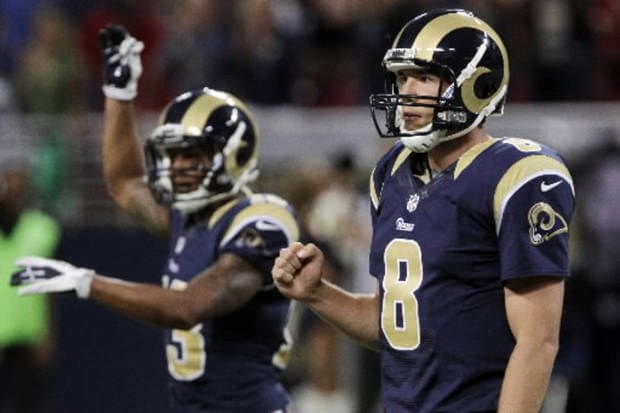 Going into the offseason, the Eagles had a glaring need at Wide receiver..but more specifically a deep-threat. Someone who can haul in the pinpoint passes Bradford is renowned for slinging out. Sure, Nelson Agholor may well develop into that role during the 2016 season, but this was an urgent need. So, the Eagles went ahead and signed Chris Givens to a one-year deal.

It’s been well documented that Chris Givens is formerly a teammate of Sam Bradford. It should also come as no surprise that Givens is on a short-term deal, much like the quarterback he’s now reunited with. The media have already romanticized the chemistry between the two that is becoming evident at Training camp..but it’s more than that. Sam Bradford and Chris Givens need each other if they are to secure long-term futures in the NFL.

Givens was a fourth-round pick in 2012. He was signed as a weapon for Sam Bradford to utilize Offensively. He was never known as an all-round threat, even during his time at Wake Forest, Givens averaged over 14.0 yards per reception. A combination of stunning speed and finesse footwork made Givens the perfect deep threat for Bradford to lock onto..and that’s exactly what he became.

Coming out of College, Givens was oft compared to former Eagle Jeremy Maclin (we’ll come back to this later) and that’s exactly how he performed. Receiving for 698 yards and 3 touchdowns in his rookie season, Givens set a rookie record, having five straight games of 50+ receiving yards.

Bradford threw 41 passes of 20 yards or more that season, at the time that was the most he’d thrown in a single season during his time in the NFL. With Givens lining up on the outside, it’s not hard to see why.

Bradford finally had a reliable deep threat..someone who played the type of Football Bradford needed his wideouts to play. But then, the torn ACL’s happened..and they didn’t just stagnate the career of the Eagles signal caller, but the career of Chris Givens.
The scintillating rookie campaign almost appeared to be a mirage. Givens started the year strong but without Bradford to drop it in the bucket time and time again, the Rams had to become a more conservational team. In the absence of Bradford, the Rams had to establish a new identity..and one they would go on to keep following Bradford’s 2014 pre-season ACL tear. Insert the emergence of Tre Mason and Tavon Austin.

The now run-heavy Rams Offense just didn’t seem to facilitate Chris Givens anymore. 159 yards on just 11 catches ended what was an extremely quiet 2014 campaign for Givens, who was later traded to the Baltimore Ravens.

The problem was, he landed in a situation that almost mirrored the one he was in with the Rams. A quarterback injury, a conservative Offense and some struggles of his own. Givens still ended the year with an average of 18.2 yards per reception, but caught just 36% of the balls thrown his way. 346 yards and a single touchdown rounded out a year that saw Givens constantly fighting for air in a Ravens Offense where he was being suffocated.

A huge year for Kamar Aiken considering the circumstances, the cemented position of Steve Smith and an intent to get rookies like Javorius Allen rendered Givens replaceable. The rest of the story is history as we all know, Givens is now a Philadelphia Eagle..but what about Sam Bradford?

There’s a common misconception with Sam Bradford. A charade, if you will. What the fans see is a quarterback who in 2015 was extremely reluctant to throw down the field..and when he did, the attempts were embarrassing at times. But when you take a closer look, you see a quarterback craving the reliability that Givens once provided.

Sam Bradford may not have set the world on fire with his deep passes, but he ranked as the second most accurate QB when it came to these shots down the field, ending the season with 63.1% accuracy.

Even more interestingly, 23.7% of these passes were dropped by his receivers or fell incomplete due to a receiver error. Of the 76 passes Bradford aired out, 18 of them were dropped. When you consider 63.1% of his passes were complete, that leaves just 14.1% of Bradford’s deep balls resulting as incompletions due to a QB error.

How much did the drops hurt the Eagles?  598 yards and two touchdowns on a total of 55 failed receptions. That average indicates that close to one in every ten passes was a failed reception.

A lack of chemistry with his receivers due to rehabbing his knee in the run up to the regular season and an Offense that chained down receivers into simplistic plays saw Bradford’s role in the Offense become nothing more than robotic, waiting for the next piece of the big machine to finish his job. That part of Kelly’s machine malfunctioned and ultimately led to his dismissal.

Fast forward to the present day and what we now have is a quarterback striving to secure his long-term future with a team who view him as their Franchise quarterback and a wide receiver who is on a prove-it deal. With such a strong receiver class on the horizon and a free agency market that’s expected to be brimming with talent, Givens simply has to perform in 2016.

Not only does Doug Pederson’s Offense allow for more freedom at the quarterback position, giving Bradford control in terms of audibles..but it also sees a much bigger route tree, allowing guys like Chris Givens to flourish deep down the field on an abundance of routes that would seem alien to this Eagles team a year ago.

How do we know this? Jeremy Maclin. The man who Givens was often compared to coming out of colelge, Maclin had an explosive first year under Andy Reid and Doug Pederson in 2015, breaking 1,000 receiving yards and recording eight touchdowns. A deep-threat who’s 4.45 40-yard dash time was utilized in bubble screen looks and seam routes, Maclin thrived under Reid as he once did in Philadelphia.

Givens ran a 40-yard dash in 4.41 seconds and is conveniently the same height as Maclin. When you combine his striking similarity to Maclin in terms of playing style and frame, you have the potential for the Eagles to once again establish a deep threat.

We know that the Eagles Offense needs some reliability at the wide-receiver position and that the chemistry of Bradford and Givens should bring a lot of explosiveness to the team..but not many people are focusing on the bigger picture.

Sam Bradford NEEDS a big season. To do that, he needs to do what he does best. Drop it in the bucket to receivers deep down the field in the “jab-jab-knockout” style Offense that Pederson deployed in the second halves of games in 2015. With what’s still a very questionable receiver corps, Givens can once again be that guy.

He’s already proven to be a consistent target in Training camp and he is going to be seeing the ball just as much in the regular season. But, like Bradford..Givens also needs a big year. After fall out of favor since Bradford tore his ACL’s, Givens is facing a very uncertain future. He needs a quarterback who can place the ball where only he can get it and who can help elevate both his game and the team around him. That man was not Ryan Mallet. That man was not Jimmy Clausen or Matt Schaub. That man was not Austin Davis. The quarterback Givens so desperately needs to save his NFL career, is Sam Bradford.

What the Eagles have are two players on a prove-it deal, looking to find long term security in the NFL. Two players who proved to be an explosive pairing back in 2012 and since separating have stagnated without the presence of the other. Two players who are now teammates again in 2016 and in a scenario where the Offense plays to both the deep-threat ability of Givens and the accuracy of Sam Bradford.

Sure, Bradford and Givens need to have good seasons individually, but if their NFL legacy is to live on past 2016, they need each other..and in the short term, that’s music to the ears of Eagles fans who want to see how far Doug Pederson can take this team in his first season as Head Coach.