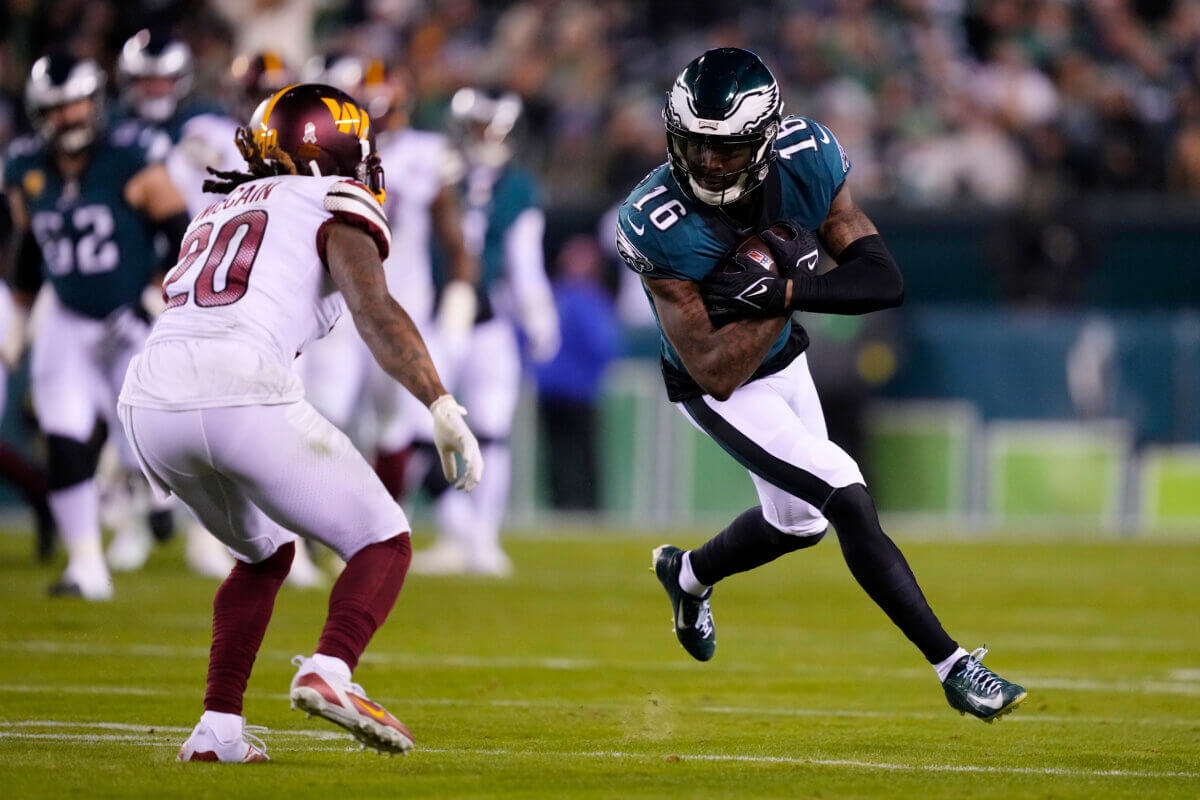 It certainly wasn’t pretty, but the Philadelphia Eagles, again, found a way to win on football Sunday and move to a franchise-best 13-1.

Philadelphia’s 25-20 win over the three-win Chicago Bears was anything but crisp. The Eagles turned the ball over three times, the playcalling was questionable, and execution was as poor as it has been all season.

Let’s look at who stood out and struggled in the windy city.

All season Haason Reddick has shown examples as to why the Eagles were right to pay a lot of money for the pro bowler. On Sunday, Reddick showed he might actually be underpaid.

Reddick forced a fumble, had two sacks, and could have been credited for two more had Justin Fields not pulled off incredible plays. Reddick’s work in the run game was just as important as well.

This was Reddick’s best game as an Eagle and he was the best player on the field Sunday.

Quez Watkins has had a very difficult season to judge. He’s come up clutch when the Eagles have needed him, but also has been involved in back-breaking plays that could make people question is longevity in the NFL.

Sunday was one of the worst games Watkins played this season. He totaled four catches for six yards, ran a terrible route that resulted in Hurts’ second pick, and couldn’t make defenders miss.

When you have comparisons of how the Eagles were force-feeding him the ball as they used to for Jalen Reagor, it’s clear today was a bad day for Watkins.

Once again, Scott came up huge in the kick return game that helped edge Philadelphia out. Boston Scott’s 30-yard return average was helped by his 58-yard return to kick off the third quarter.

Jalen Hurts and the offense would quickly score on the drive to go up two scores and put the Bears on their heels. As bad as the special team’s group has been, Scott’s emergence on kickoff has been a pleasant surprise.

Steichen will need to be better sooner rather than later this season because if he called a game like today in the playoffs, the Eagles will be one and done very quickly.

Dallas Goedert stayed off the field once again to be fully healthy for Christmas Eve. Because of that, Jalen Hurts trusted his top receivers and they both paid off in a big way.

Smith totaled five catches for 120 yards while Brown tallied nine catches for 181 yards. Neither got in the end zone but made key catches throughout the afternoon to put Philadelphia in a spot to succeed.

With Goedert coming back, the Eagles should be back to their dominant selves shortly.

I’ll be objective: Hurts’ performance Sunday was his worst of the season. That’s not a bad thing considering Hurts made some incredible throws and put his team in a position to win once again.

I also can’t look past the two picks (even if only one was his fault) and the fact he took a lot of unnecessary hits in the run game. While his coaching staff needs to do a better job for him, Hurts will need to be better throughout the rest of the year.

Thank you Doug. We will always love you.