Remember when Tim Tebow played for the Philadelphia Eagles? 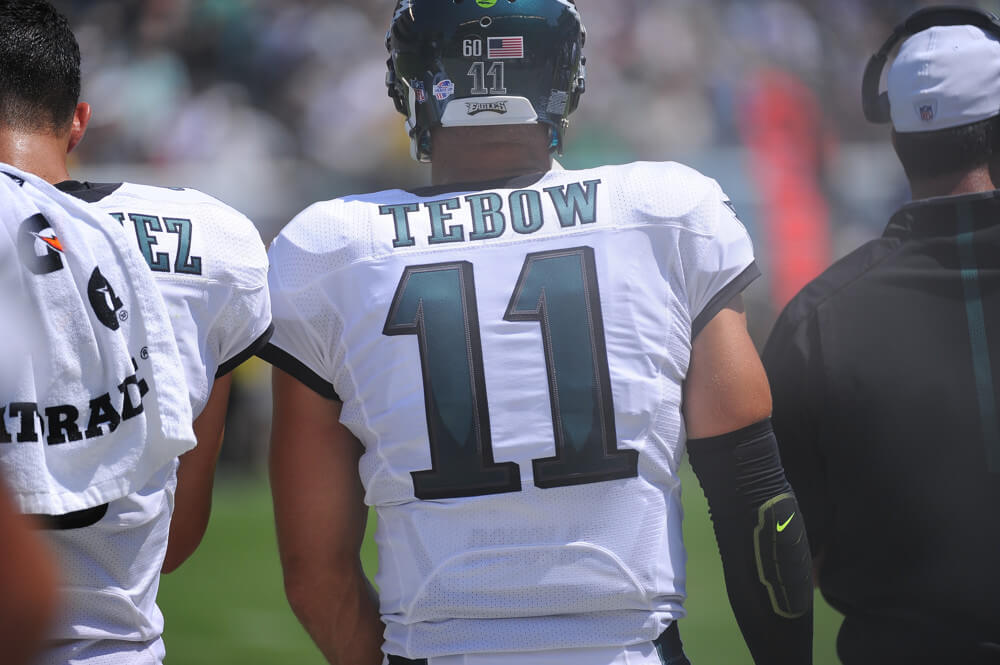 Tim Tebow is back in the NFL, but not as we know him. At 6’2, 236 lbs, the former Heisman winner is now looking to compete at tight end in Jacksonville. His last taste of NFL action came with the Philadelphia Eagles in 2015, so what better time to turn back the clocks and take another look at one of the strangest times in recent memory.

Let’s turn back the clocks to 2011. Tim Tebow looked like he was destined to have a future in the NFL as a starting quarterback. He replaced Kyle Orton as the QB of a 1-4 Broncos team and turned things around instantly…kind of. Tebow Mania swept through the nation as his winning record failed to marry up to an atrocious 46.5% completion percentage and a worrying 7 fumbles. His rushing ability and leadership stuck out like a sore thumb though and his 660 yards on the ground helped lift the Broncos to a 7-4 record. While it became clear during his time with the Jets that his ceiling as a QB may be limited, that didn’t stop Chip Kelly from giving him one last shot.

Despite having Sam Bradford, Mark Sanchez, and Matt Barkley already on the roster, Kelly decided to bring in a fourth quarterback to compete for a roster spot. That man was indeed Tim Tebow – who hadn’t played a competitive snap since the 2013 preseason, where he failed to make the New England Patriots roster. He then tried his hand at SEC broadcasting. Why was he brought in? Not a clue.

Tebow was set to compete with USC’s Matt Barkley for the QB3 spot behind Sanchez in a battle for the ages. Training Camp was to be the stage where the Florida product would look to make his first mark, but he drew just as much attention off the field as he did on it. After signing a fan’s bible (??), Tebow actually went on to have a pretty productive Summer. But whether or not he’d have enough in the tank to beat out the Eagles’ draft pick came down to preseason.

His first appearance came in the fourth quarter against the Colts and it didn’t take long for him to strike up a rapport with TE Eric Tomlinson (now on the Ravens), finding him on 3 consecutive passes.

Rasheed Bailey climbed the ladder to haul in a floater to end the third quarter and give the Eagles a first down.

He did score a rushing touchdown on an option play inside the 10, sending the Linc into a roaring ovation.

What didn’t help was Matt Barkley getting the bulk of second-half reps and throwing for 192 yards, completing 12 passes out of 2020 attempts and turning the ball over once. Tebow went 6 for 12 for 69 yards (nice) but was also sacked 3 times, fumbling once.

Against the Ravens, Tebow looked great on the ground…and like Tebow through the air. A 25-yard rush set the tone but an attempted throw into double coverage that fell gracefully incomplete raised some questions. The problem was, he only threw five passes, making it hard to see any comparable sample size while Barkley completed 6/14 passes for 86 yards.

It became clear to see why the Eagles liked him though. Tebow executed option plays perfectly having gotten plenty of practice with the Broncos and was able to make things happen on the ground, deceive linebackers to set up a screen, and there were some *near* flashes of what could be if he was even mildly consistent when it came to ball placement.

He did rush for a second touchdown but it was overturned as the ball was out of bounds before he crossed the pylon.

The Eagles decided to see just how much value they have in the RPO machine by attempting a pair of two-point conversions early. They both failed. The first was a failed QB draw and the second a poorly thrown ball that missed Nelson Agholor and instead found the hands of a Packers defender.

In all seriousness, Tebow did seem more composed against the Packers and was able to hit his receivers in stride a lot easier. It was honestly becoming easier to see him taking the QB3 role if he could take one more major stride. There was development week-on-week, while Matt Barkley ended his night going 5-for-9 for 28 yards. Tebow might have only completed 2 passes that night, but he also only attempted two.

Going into the finale, he had a passing record of 8-for-17, for a total of 82 yards. His completion percentage was just 47.1% though and this was obviously concerning.

If you were a betting man, the odds were heavily in Barkley’s favor…but that just seems to be where Tebow shines brightest.

In my opinion, this performance rivals Sam Bradford’s against the Packers just a few weeks earlier in terms of preseason legend. Tebow looked like a different beast against the Jets, completing 11 of 17 passes for 189 yards and a pair of scores.

Connecting with Rasheed Bailey in the back of the end zone, Tebow put his best foot forward to show that he can occasionally drop it in the bucket.

He found Freddie Martino for his second, but he also connected with the wideout on an absolute 45-yard bomb. This was impressive. Tebow’s lack of deep ball accuracy had always been a huge knock on his game and a large reason why he struggled as a starter from a purely throwing perspective. This game may well have been his best effort to show the coaching staff that he can get it done.

Perhaps the best play of the game came at the end of the first half. After taking a hit, Tebow span out of a potential tackle and took off down the sideline for a first-down, throwing it back to his days in Denver.

Matt Barkley’s job security was all of a sudden in jeopardy. Tebow ended preseason completing 58.3% of his passes (which was 47th among all QB’s who threw at least 30 passes so, not great), for 286 yards, 2 touchdowns and 1 INT. The real wildcard here though was of course that he was a perfect schematic fit and also added 82 rushing yards and a rushing score to his name.

Was it enough to win the job?

“We felt Tim has progressed, but we didn’t feel he was good enough to be the [No.] 3 right now,” Chip Kelly said after roster cuts were completed.

Matt Barkley was named QB3…FOR ABOUT A MINUTE!

The Eagles traded him to the Cardinals for a conditional seventh-round pick and after bouncing around the league for a while, he landed in Buffalo, where he had his own moment in the Sun. He even threw a touchdown pass in 2020 – a 56-yard bomb to Gabriel Davis. It’s safe to say things turned out okay for Barkley.

The best part is…THE TWO WILL COLLIDE IN 2021 IF TEBOW MAKES THE ROSTER. That’s right folks. The rematch you’ve all been waiting for. Matt Barkley vs Tim Tebow in a game of players likely sat on the bench watching their teams play for ultimate bragging rights.

Who will win this time? Will Tim Tebow be a starting tight end, glancing at Barkley as he strides past him en-route to a clutch game-winning touchdown? Who knows…