Which Eagles WR is best poised for a breakout against the Bucs? 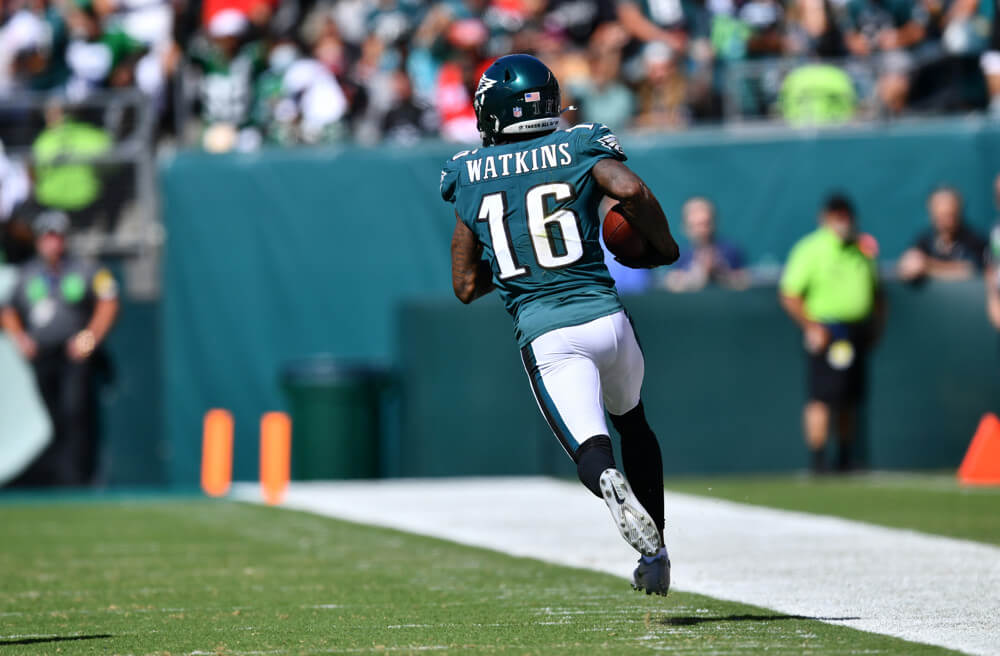 The Philadelphia Eagles have developed somewhat of a reputation for running the football. They do it well.

The best in the NFL, in case you missed it, but this is the playoffs, so Jalen Hurts and Co. are going to need a little help through the air.

Devonta Smith has been terrific, Jalen Reagor has been forgettable, but there’s reason to believe that the aerial star of Sunday’s matchup against the Tampa Bay Buccaneers will be Quez Watkins. Here’s why.

In Philadelphia’s loss to the Bucs earlier this season, Watkins drew five official targets; that was second-best for the day behind only Zach Ertz.

Although the game ultimately resulted in a loss, Watkins had four total receptions, including a successful two-point conversion. The kid made some plays.

With the very different Eagles team we see before us, there’s reason to believe Watkins could improve on his Week 6 performance.

As he did many moons ago, Watkins will likely draw coverage from a combination of Tampa corners Jamel Dean (questionable with a hamstring injury) and Ross Cockrell.

Respectively, those corners are ranked 12th (77.2 grade) and 30th (69.6 grade) in the league in coverage among all cornerbacks, according to PFF.com. For a little more context, Jalen Ramsey ranks first with 86.3.

This is all to say, Tampa’s had some bright spots in pass coverage despite allowing the 12th most passing yards in the NFL.

At this point, you’re probably wondering why I’m putting my money on Watkins, but it has nothing to do with Dean or Cockrell. It’s someone else: Dee Delaney.

If Dean cannot go on Sunday, Delaney will absorb quite a few snaps.

Unlike Dean and Crawford, Delaney does not have a snap count that qualifies to rank amongst PFF’s elite, but he will be an essential part of Wildcard Weekend for the Eagles offense.

Delaney’s coverage grade of 53.4 would put him outside of the top 100 corners in the NFL. If Hurts sees Delaney lined up on Watkins, a target in that direction should be automatic.

Eagles fans already saw a glimpse of what could be in Week 6, and things have changed for this confident Philadelphia offense.

If you want to live for Divisional action, Watkins could be the ZUUL to Delaney’s Key Master.

Short and sweet, I know. I just want you all to be on the lookout for an unlikely hero. We don’t need Iron Man. Ant-Man would be fine.

It certainly wouldn’t be the first time an unlikely hero sparked the pilot.