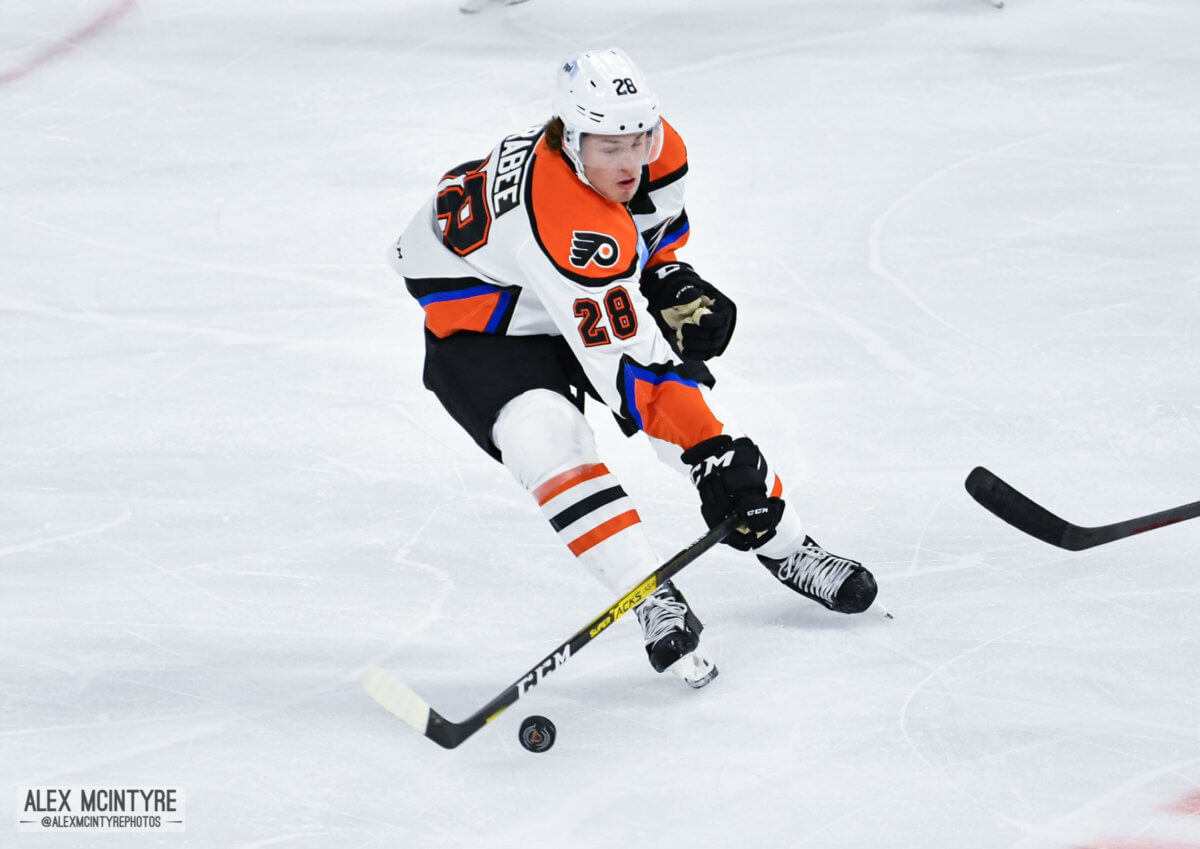 “Flyers Prospects Weekly” is a new weekly column at Philly Sports Network providing you with snapshots into the Philadelphia Flyers farm system. It will highlight prospects that stood out that particular week for their respective teams.

Twarynski recorded his first career goal in the NHL Saturday night in Vancouver. The Flyers caught the Canucks off guard during a line change and Twarynski sent a missile towards the net, beating Jacob Markstrom. The 21-year-old is playing around 11 minutes a game and showing some early signs that he deserves to remain with the Flyers.

After not making the Flyers, Farabee’s main goal was to make an immediate impact in Lehigh Valley. The first-year pro is doing just that. Farabee scored a goal in his first two games with the Phantoms. Friday night’s tally against Wilkes Barre/Scranton can only be defined as filth as he just made the opposition look foolish. If Farabee keeps up this level of play, his time in the AHL will be short.

Myers also looked strong in his return to Lehigh Valley. He posted two assists in his first two-game back and already looks like the team’s most impactful blueliner. Unfortunately, it may take a little longer for Myers to return to Philadelphia. The current log-jam on the blue line makes it challenging for him to just be called up, even if he deserves it.

Rubtsov has yet to find the back of the net but is making an impact as a playmaker. He recorded three assists this past weekend and seems to be picking up right where he left off last season before the injury.

Another promising rookie with the Phantoms, Ratcliffe also recorded his first goal on Saturday against Hershey. The 20-year-old currently has two points in three games. He may not be one of the first prospects in line for a call-up but Ratcliffe is in a good position for a strong season with Lehigh Valley.

Brink is off to a great start to his freshman year at the University of Denver. He looked strong in two games this weekend against Lake Superior State, recording one goal and two assists. Brink now has four points in four games to start the year.

This is Kalynuk’s year to really take off. The former seventh-rounder already looks like a steal and he continued to make a name for himself this past weekend. Kalynuk posted an assist in Friday night’s loss to Boston College and added two more in Saturday’s decisive victory against Merrimack College. Three points in your first two games is certainly a good way to start the season.

The Calgary Hitmen’s schedule has been sporadic to this point and they have played a lot of games close to each other. However, it would be difficult not to mention the success Zamula is having to start the WHL season. He has ten points in Calgary’s first seven games. There’s yet to be a contest where his name was not on the score sheet and he’s recorded two points in three separate contests. Now a leader for the Hitmen, Zamula is setting himself up nicely for a strong final year with the squad.

O’Brien and the Penticton Vees played in two games this past weekend. In Friday night’s victory over the Powell River Kings, he posted one goal and two assists. Unfortunately, he could not get on the scoresheet Saturdays and Penticton suffered its first loss of the season. So far, O’Brien has 20 points in 12 games and leads his team in scoring.

It is very clear to see that Lycksell is making strides in his progression this season. Just ten games into the SHL season, Lycksell has posted three goals and seven assists. Just as a comparison, he only totaled 12 in 51 51 SHL games last season.