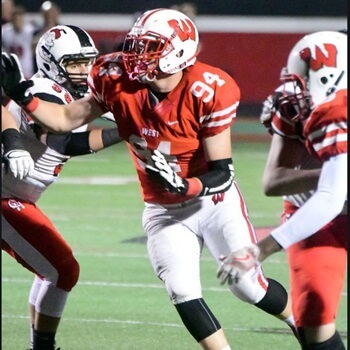 Steven Faucheaux is a 2019 4 star strong-side defensive end who plays for Lakota West high school out of West Chester, Ohio. Faucheaux is a 6-4, 272 lbs defensive end who is the 5th rated player in Ohio, 10th rated strong-side defensive end, and 99th rated player by 247. Faucheaux uses his arm strength to push over defenders at the line of scrimmage and get to the ball carrier. He is ferocious as a run stopper and can rush the passer with underrated quickness. He has everyone from Alabama to Ohio State recruiting him and is one of Penn State’s top targets in the class.

LJ: How was your visit to Penn state and will you visit again

Steven: I really enjoyed it. The atmosphere was unlike anything that I’ve experienced and the coaches and staff really made my parents and me feel welcomed. I definitely plan to go back but I don’t know if I can make it during the season because of how far away it is.

LJ: Is Penn state high on your list of schools? What are your top schools?

Steven: I have not made my short list yet but I’m sure that Penn State is on it.

LJ: How has this season been going? What were your stats your last game?

Steven: The season is going pretty rough. We are 1 and 4 right now. Special teams are killing us and our offense has struggled in all of our losses. We’re young anyway but have also had a few injuries. I’ve been asked to play both ways a lot ever since our first loss and have played every position on the OL at some point or another since, depending upon who the other team’s best DL is. At this point, I have worn 3 different numbers and the one that I’m currently wearing isn’t listed on the roster. So, officially, I don’t have any stats for most of our games. I haven’t gone back and counted when I watched the film but I feel like I’ve been pretty productive. I was moved to DT from DE this season so I’m double teamed on most plays now.

LJ: What do you think of not only how good Penn state has been but how good there defense has been this year?

Steven: I knew that they would have a good defense but they are even better than I thought they would be. They looked really good against Iowa last week. I love how they swarm to the ball and how they play together.

LJ: What did you think of the Penn states win vs Iowas?

Steven: It was a close call for them but Iowa is a good team and is even tougher to beat on their home field. Penn State will be on everyone’s target list so I expect that other teams will play them tough this season too. They just battled to the end, never panicked and got it done against a really good team. Iowa looks to me like they are underrated.

LJ: You are one of the top defenisve linement in the 2019 class. What about your skills helps you make the impact you do?

Steven: I think that my aggressiveness and my ability to find the ball in traffic is my biggest strength. I feel like I’m pretty versatile too. Coaches have also told me that I’m a smart player.

LJ: What were your stats last season?

Steven: I had 5 sacks last year in 9 games playing mostly at DE. I don’t remember any of the other stats. My team doesn’t really talk about those much on defense.

LJ: What others teams are pursuing you hard right now? What teams that havent offered are showing you interest?

There are a bunch more that have shown interest that haven’t offered. Stanford, Texas, Florida State, VA Tech, Georgia, and a bunch of other schools.

LJ: When do you plan on committing?

Steven: I want to learn more about a few more schools and plan to go to some more games this fall. I don’t know for sure when I will commit yet but it won’t be until after the early signing period in December. I think that I’ll probably have 2 to 4 schools that really jump out at me. When I pick a school I want to know how they see me fitting in with the team before I commit. That might not happen until later but I think coaches will have a better idea after then have a better picture of who they will be adding from the 2018 class and who might be leaving.

LJ: Great talking to you Steven, will be watching your game, stay focused.