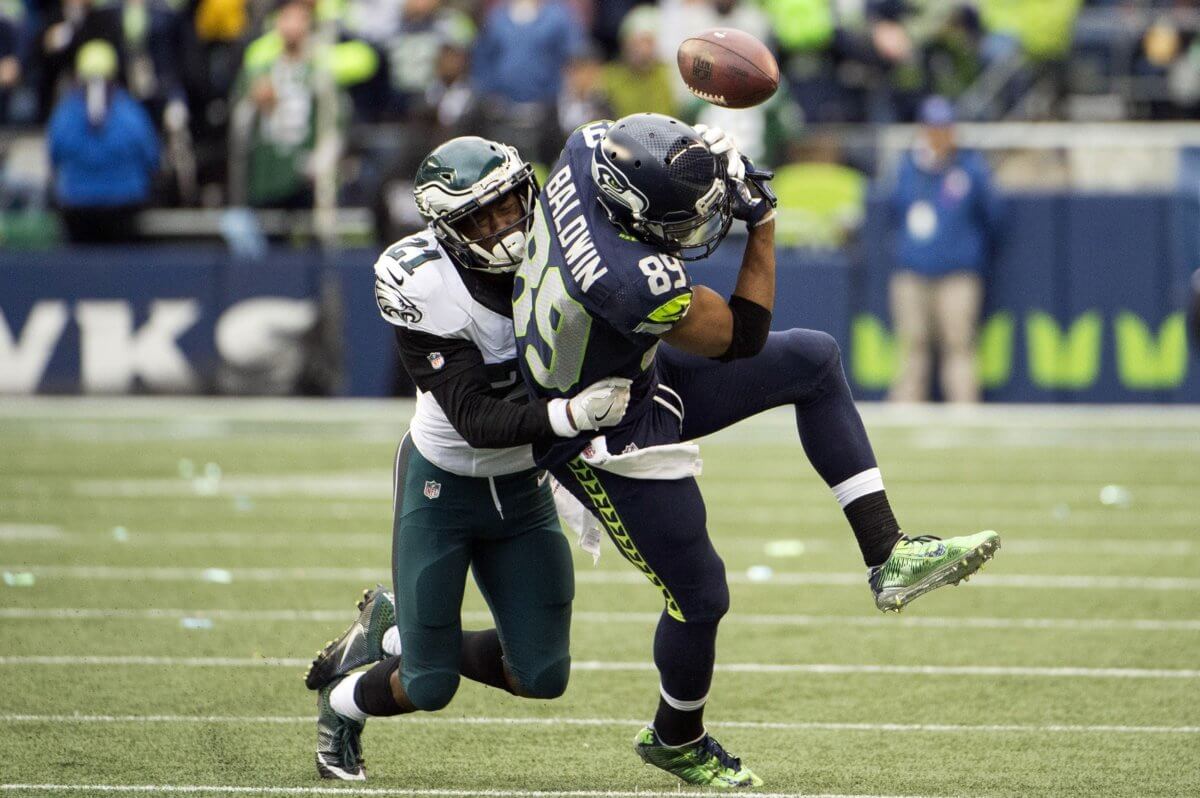 It was tough..it was gritty, but the Eagles eventually fell short of the mark against the Seattle Seahawks. With so much emphasis being placed on the Defense, the Eagles cornerbacks were put in an unusual spotlight..but could they hold their own against one of the best teams in the NFC?

Carroll has been on a tear in recent weeks, more than making up for his inconsistent play toward the start of the season. A new blend of physicality and awareness has graced the Eagles cornerback and it was on display again in the loss to Seattle.

The first and most notable instance was on a huge hit against running back Thomas Rawls. Carroll detected the screen pass almost instantly as the cloud corner, cut past his blocker and charged down the field, colliding head on with the running back and making his biggest hit of the season, forcing an incompletion. In a game that demanded physicality against a team that does it better than anybody..Carroll came out swinging.

His coverage was excellent throughout the game. Aside from the huge hit, breaking up a crucial play in the endzone was the cherry on the cake for Nolan Carroll, who continues to show up when it really matters. You can almost feel the confidence bouncing off of his shoulders and with good reason.

Zone coverage was slightly peculiar in this game, but Carroll did a great job here. Prior to the snap, Wilson pointed out Destiny Vaeao on the right hand side to his Offensive line and naturally looked to his left when he got the ball. Carroll did a great job of staying light on his feet and slowing the receiver down, staying ahead of him for as long as possible and completely taking the read out of Wilson’s plan.

The inconsistency that Carroll lacked at the start of the season has now completely vanished from his game. His technique is as electric as ever and he’s playing with much more confidence. Whether or not the last few weeks have been the first without a lingering ankle injury concern or not is debatable..but Carroll is making a huge statement in the Jim Schwartz Defense right now.

Every week, Jalen Mills seems to be getting more and more confident, but as we learned on Sunday it can be both a blessing and a curse. After covering the likes of Julio Jones and Odell Beckham Jr, Mills was now tasked with keeping players such as Doug Baldwin under wraps.

The game started in worrying fashion for Mills, who took a really bad angle when trying to tackle C.J Prosise. It was this missed tackle that paved the way to a huge 73 yard touchdown run for the Seattle running back. It wasn’t a huge error, it was just a case of acting almost too instinctively and a little nervy..which is understandable given the environment.

The seventh round pick did make up for this a little later on however with some great coverage against Richardson, ensuring the pass fell incomplete. Mills seems to play much better when he opts out of jamming at the line and instead opens his hips and runs stride for stride with his receiver. Predictably, the big play was followed by what is becoming a trademark finger wag..which came back to haunt him.

The Seattle receiving corps is probably not the best group of players to aggravate. Mills was burned on two consecutive plays, big ones too. The first being on a route where once again, he seemed to act too instinctively..adjusting to what the predicted the route would become as opposed to shadowing his receiver. It almost looks like he was scared off the route or bumping…which led to a big play for the Seahawks.

After being burned by Doug Baldwin, it was Lockett’s turn to take a shot. In what rapidly became a sprint race, Mills was slow off the mark, creating a perfect window for Russell Wilson to throw a ball into. Again though, it almost looks like Mills takes an extra step outside. Maybe it’s a case of trying to avoid PI calls, but there seemed to be a lot of space between himself and receivers after that first finger wag..

..until the second one. The former LSU standout recovered extremely well after initially watching Jermaine Kearse run straight past him, to again force an incompletion. For me, this was a reassurance that Mills does have the speed to keep up with some of the bigger threats in the NFL as he closed down efficiently here. But again, the finger wag is probably a little premature.

It wasn’t the worst game we’ve seen from Jalen Mills, but it certainly wasn’t the best. Whether the Seahawks and the twelfth man got in his head or whether there was a focus on avoiding flags, Mills seemed inconsistent and very forgiving when it came to spacing.

Prior to his injury, Leodis McKelvin was surprisingly having a good game..but a quiet one. For cornerbacks this is often a good thing as it means they’re doing their jobs to a high standard. McKelvin has had a rollercoaster year in Philadelphia, but this was one of his better outings.

McKelvin wasn’t afraid to get physical with the Seattle receivers and his early breakup was one of the more impressive plays he’s made this season. Having to adjust to Nolan Carroll maintaining a block, McKelvin worked his way outside and cut what would have been a first down short with a big tackle. It’s this ability to stop plays dead in their tracks that makes McKelvin so lethal when healthy.

However his reactions still looked a little rusty. A common theme among cornerbacks against Seattle was that they spent too much time looking over their shoulder for where Wilson was as opposed to the man running straight by them. Mills and McKelvin were the two real guilty parties here but it was rare for these errors to prove costly.

Overall, McKelvin seemed much quieter than usual, but when he was called upon..he stopped everything dead in the moment, which is all you can really ask of him. It’s been a real shame that injuries have played such a big part in his first season under Jim Schwartz in midnight green as when he’s been 100%, McKelvin has been fun to watch as he heats up during a game.

The slot corner position is becoming ever harder to evaluate because it changes so much throughout the game. However Jaylen Watkins was the man often called on by the Eagles in nickel looks, playing in 54% of snaps with Mychal Kendricks seeing an increase in playing time when the team stayed in a 4-3 look.

The combination of Jenkins and Watkins proved to be an efficient one..with Jenkins leading the team in tackles AGAIN and Watkins picking up a further five. There weren’t really any faults with neither Jenkins nor Watkins during the loss to Seattle..except for this one play.

The play I’m taking about is of course the touchdown to Jimmy Graham. Watkins starts promisingly enough and blankets Graham well, until he turns him outside. Watkins then aims to throw down the much bigger tight end and instead flings him toward the endzone once the catch had been made. It was a terrible tackle attempt..something we’re not really used to seeing from Watkins.

In terms of run stopping, Jenkins once again got behind the line of scrimmage to make a tackle for a loss, while Watkins was often used in zone coverage looks, aiding Jordan Hicks stop the production of Jermaine Kearse and Jimmy Graham. The duo had a steady game..but one crucial error from Watkins hurt the team hugely.