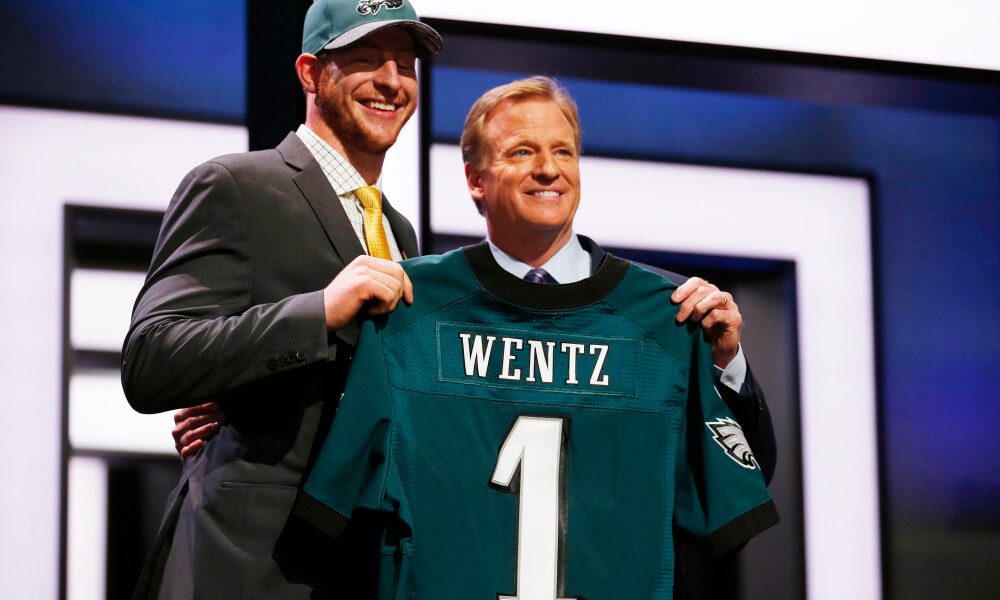 Apr 28, 2016; Chicago, IL, USA; Carson Wentz (North Dakota State) with NFL commissioner Roger Goodell after being selected by the Philadelphia Eagles as the number one overall pick in the first round of the 2016 NFL Draft at Auditorium Theatre. Mandatory Credit: Kamil Krzaczynski-USA TODAY Sports

The first round of the 2016 NFL Draft saw its fair share of twists and turns. From surprise trades to a player who was formerly projected to be the first overall pick dropping down outside the top 10, the first round had it all. But how has all the drama affected the Eagles?

The first shock after the Chargers taking Joey Bosa came from the Dallas Cowboys who couldn’t resist the talents of running back Ezekiel Elliott. The Giants then surprisingly took Eli Apple over Vernon Hargreaves before the Redskins added TCU wideout Josh Doctson.

The Eagles may have secured their future franchise Quarterback with the second overall pick, but it remains unclear as to how soon we will see him take the field. The idea behind the pick is to let him marinate in an extremely Quarterback friendly coaching staff whilst Sam Bradford leads the Offense for at least one more year..but with Bradford infuriated at the decision to trade up, just how well the Offense will click is anyone’s guess. The remaining three teams in the division have picked impact players who could become game changers in their rookie season. The Eagles may be the ones laughing in 2-3 years time, but it’s the remaining three NFC East teams who hold the immediate advantage.

The birds allowed more rushing yards than any other team in the league last year and will now face a stout Cowboys Offensive Line and a running back who achieved two 1,800 yard seasons in a row at college. The same Cowboys O-Line saw DeMarco Murray lead the league in rushing prior to his move to Philly, the idea of a back compared to the likes of Todd Gurley and Adrian Peterson bursting through the Eagles trenches twice a season is naturally intimidating..especially when you consider the lack of depth at linebacker currently.

In 2-3 years time, we may see just how talented Carson Wentz is. But until then, it will likely be an unwilling Sam Bradford trying to outsmart both Janoris Jenkins and Eli Apple twice a season. Apple may have been streaky during his time at Ohio State, but his ability to go toe-to-toe with receivers much bigger than he is was impressive. He isn’t a physically intimidating corner but he sticks to his man like glue and for an Eagles receiving corps who for the most part struggled to gain separation last season, the addition of Apple to what was an embarrassing Giants secondary in 2015 cannot be overlooked.

Then, there are the Redskins. Sam Bradford wasn’t the only Quarterback to heat up in the closing stages of last season. Kirk Cousins took the Redskins to their first NFC East title since 2012 with the help of Pierre Garcon and an emerging Jordan Reed whilst DeSean Jackson played just nine games. The addition of a receiver renowned for his strong hands and challenging the ball at its highest point is a big one, especially after the team traded down one spot. Injury may have ended his season early, but it didn’t stop Doctson from racking up 14 touchdowns and 1,337 yards in just 11 games.

The Eagles secondary as it stands has seen a lot of depth added to it through free-agency and in terms of a long term plan, it’s one of the more interesting units in the league. With Eric Rowe continuing to develop behind two corners who have played under Schwartz previously and a group of young corners who will be competing for roster spots, the Eagles Secondary is loaded with potential, but it may be a while before we see that potential turn into consistent ability on the field.

It was a bumpy season for the Eagles cornerbacks last season and with Maxwell having moved on, the team are keen to provide enough explosiveness and pressure to be effective under the tutelage of Jim Schwartz. With the Redskins adding yet another weapon on the outside, things may be slightly more difficult when the two teams meet.

So what happens to the Eagles draft needs going forward? It would be absurd to change direction to adjust to what the other teams in your division have done in the first round, but it’s also hard to ignore the players they have added. The Cowboys have a running game once again which directly impacts one of the Eagles’ biggest flaws last season, the Redskins have added another Offensive weapon that could probe problematic for a young secondary and the Giants have drafted a corner who looks to make life difficult for Sam Bradford and the Eagles receivers.

It could just be coincidental that the three remaining NFC East teams have drafted players that could prove to be game changers in the two divisional matchups against Philadelphia and also play to exploiting weaknesses within the Eagles depth chart..but the next few rounds are going to be crucial for the Eagles if they are to avoid a problematic 2016 campaign.

In terms of the bigger picture the Eagles and the Rams became the final two teams in the NFC to finally add what they believe to be a Franchise Quarterback after transitional seasons. With Reich, DeFilippo and Pederson at the helm, Wentz has entered arguably the perfect destination to refine his craft and prepare for his first snap as an NFL Quarterback. The ceiling is sky-high and the belief is that once his flaws are ironed out, Wentz has the makings of a long-term franchise Quarterback. The build, the athleticism, the ability to win games and make consistently accurate throws into tight windows, Wentz has it all. It’s just a case of transferring those skills to the NFL.

The only real question is, what kind of team will Wentz be leading? A struggling one? A team on the edge of playoff contention? An Offensive based team? A team with a committee backfield or a team with a lead rusher? All of these questions have to be answered in 2016, but whether they will be answered through struggle or success could well come down to the six divisional games in which the Eagles face game-changing players set to exploit the team’s biggest flaws.