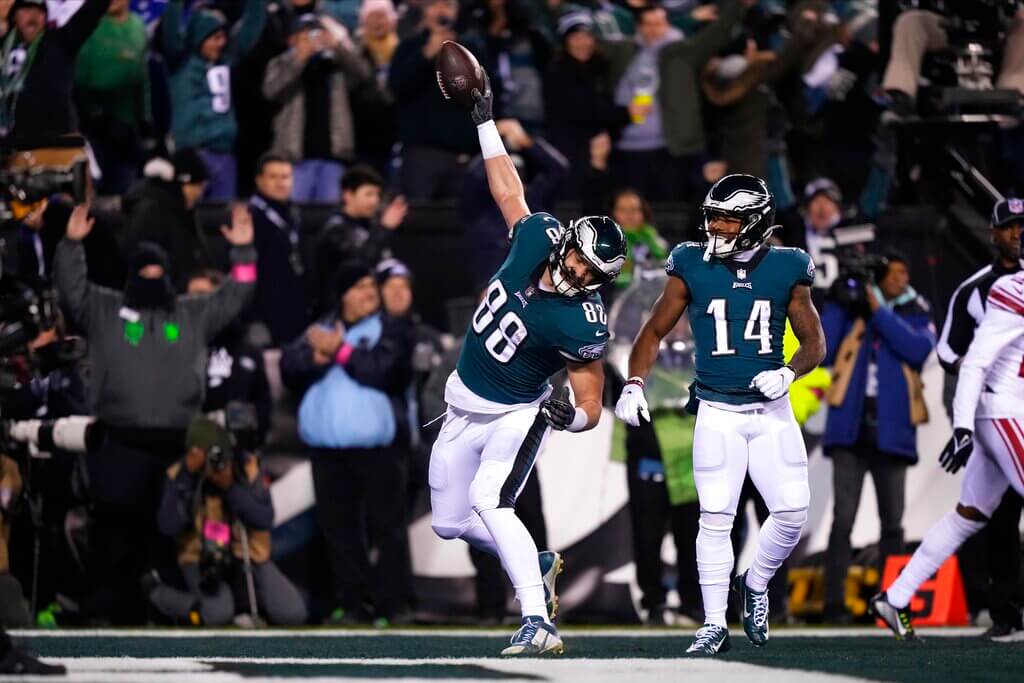 Philadelphia Eagles tight end Dallas Goedert (88) celebrates his touchdown catch as teammate Kenneth Gainwell (14) looks on during the first half of an NFL divisional round playoff football game against the New York Giants, Saturday, Jan. 21, 2023, in Philadelphia. (AP Photo/Matt Slocum)

It’s official. The Philadelphia Eagles will host the San Francisco 49ers in this year’s NFC Championship game. Both teams were able to win their divisional round matchups, setting the stage for a clash that will be brimming with star-power.

49ers vs Eagles for the NFC Championship

The game will take place at Lincoln Financial Field on January 29th at 3PM EST.

The Eagles won their game in convincing fashion, jumping out to a 28-0 lead before it felt like the Giants even had a chance to react. Boston Scott cemented his legacy as the ‘Giant Killer’, playing his part in a rushing attack that combined foe 268 yards and 3 scores on the night. It was a similar story when the two teams faced off in their first of what would be three showdowns this season.

Daniel Jones was unable to have the same success against the Eagles as he did against the Vikings, while life was made relatively easy for Jalen Hurts.

As for the Niners, they beat the Cowboys on Sunday evening and kept two streaks alive in the process. Brock Purdy’s win-streak lives on as the former Mr. Irrelevant is yet to lose a game. So does the fact that the Cowboys have failed to reach the NFC Championship in 12 consecutive appearances. That run is the longest of any team in NFL history.

The Niners will head to Philadelphia with a dominant defense and one of the most explosive offenses in all of football. The Birds will be hoping to ride the current wave of confidence having proven time and time again that they can beat anyone on any given Sunday.