Note: if you purchase something through one of our affiliate links, Schneps Media may earn a commission.
By Nathaniel Tennesen Posted on January 12, 2023 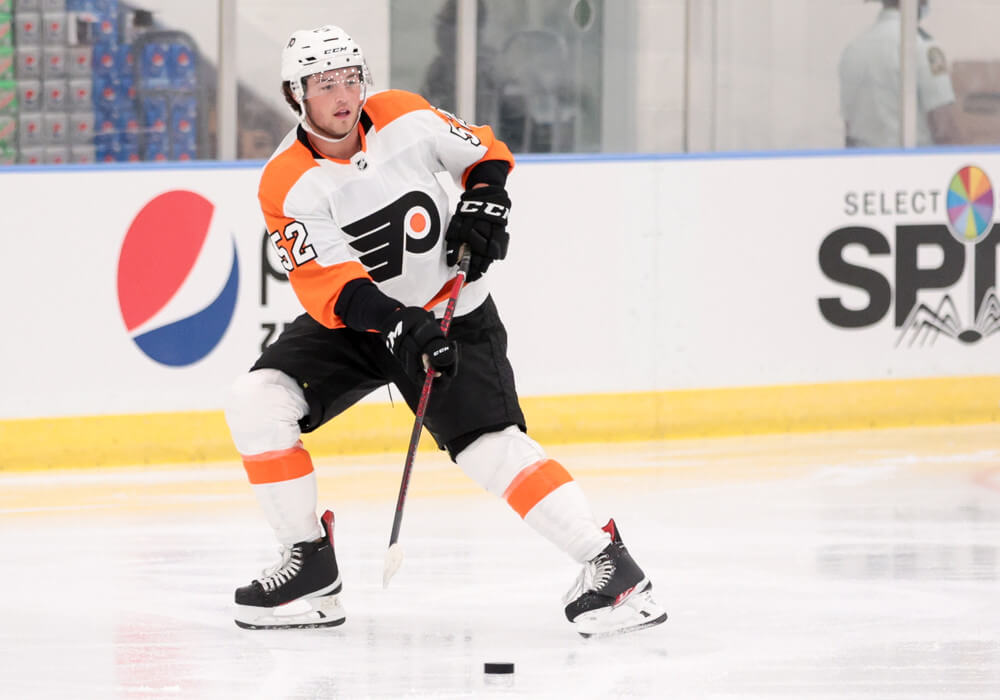 Yesterday, the rosters were released and two players from the Phantoms will be representing the Atlantic Division in the AHL All-Star Classic. Fans of the Phladelphia Flyers and Lehigh Valley Phantoms will be familiar with two names who have been given the nod, Tyson Foerster and Cam York.

It’s highly unlikely that York will be in attendance for All-Star weekend since he’s playing well with the Philadelphia Flyers, and the Flyers face the New York Islanders on February 6. Nonetheless, the selection for York is still an achievement to be proud of even as he’s beginning to make strides in the NHL. For Foerster, it’s his first AHL All-Star selection.

After York was sent down to Lehigh Valley at the end of Flyers training camp, the 22-year-old defenseman played with the purpose of making it back to the NHL, and he did. In 20 games with the Phantoms, York tallied 13 points (3G, 10A). He scored at nearly a point-per-game pace and was playing top minutes on defense, along with time on the power play.

With the Phantoms, York focused on the parts of his game that were inconsistent during training camp and the preseason. John Tortorella spoke highly of York after the decision was made to cut him. A tough decision, but it ended up being the right one:

“For me, with Yorky, it’s not the physical skills, I think it’s the mental skills. I think it’s him learning to, first of all, wanting to be a guy that’s going to make a difference, and being the player to make a difference. Just remember guys, this is a young man playing a really important position in our game. This isn’t bad. This is process of building a team and we feel he’s going to be a very important part of this team when we find our way.”

Since York was called back up to Philadelphia on December 8, 2022, he’s been the main bright spot on the blue line. Tallying eight points (1G, 7A) in 15 games thus far, York has seen a great deal of time alongside Ivan Provorov on the top pair. York’s also been registering an average of 19:09 of ice time in a top-four role.

With still a long way to go in his development, York is solidifying himself as a full-time NHL player, and his progression is not going unnoticed by Tortorella.

Along with York, Foerster was one of the final cuts at training camp. Tyson Foerster showed glimpses of his talent and upside during the preseason, but it just wasn’t enough to crack the final roster.

Foerster has been having a steady year in Lehigh Valley. With 21 points (9G, 12A) in 33 games, he’s remaining consistent after an injury-riddled 2021-2022 campaign. He’s currently ranked third in team goals behind Elliot Desnoyers and Artem Anisimov, second in assists behind Olle Lycksell, and second in points behind Lycksell. Foerster is already having a career year this season, and there’s still more to come.

Tyson Foerster is an exciting talent within the Flyers’ prospect pool and one who shows great promise. Along with a big frame, he has a shoot-first mentality but also displays playmaking skills. Tortorella is fond of Foerster’s offensive skill set, but mentioned learning to play away from the puck is another skill to continue developing:

“I really like him. We need skill; he can score goals. My message to him in our meeting today when we talked with him: “it’s our job as coaches to teach him to play away from the puck, but I don’t want to get in his way with his offensive part.”

Seeing Tyson Foerster in a Flyers sweater toward the end of the 2022-2023 season is a possibility. A call-up would certainly be a compliment on how well he’s played in the AHL this year, and it will give him the experience of playing at the NHL level. At 2023 training camp, Foerster will no doubt be a player with a high chance of cracking the 2023-2024 opening night roster.