Key matchups to watch when the Eagles battle the Giants 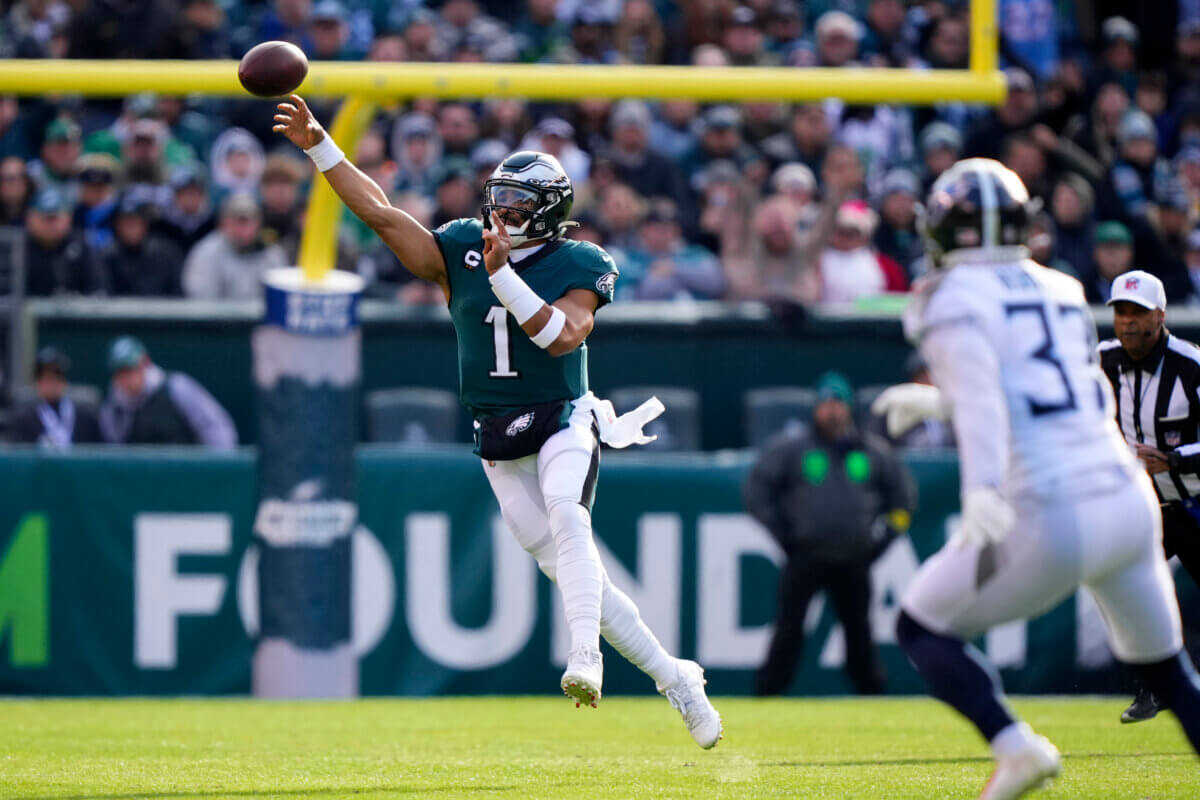 Philadelphia Eagles’ Jalen Hurts throws during the first half of an NFL football game against the Tennessee Titans, Sunday, Dec. 4, 2022, in Philadelphia. (AP Photo/Matt Rourke)

The 11-1 Eagles head up north to take on a division rival that needs a big win on Sunday. The 7-4-1 Giants started the season by shocking the league but have regressed as the season has gone on. While they have been plagued by injuries left and right, the Giants still find themselves in the middle of a playoff race.

Both teams have a lot to fight for as a win for the Eagles would clinch their playoff berth and a win for the Giants would keep them in the dance for the time being. Here are a few matchups to watch when the birds battle big blue.

Saquon has had a huge bounce-back year this season. While it is a contract year, the Giants running back has made his case for deserving a big contract extension. Barkley has rushed for 1,055 yards this season while scoring 8 touchdowns as well.

He’s averaging 4.4 yards per carry but the Eagles are very aware of Saquon’s ability to change the outcome of a game with one run. On the other side of the ball lies the Eagles’ run defense. While they were able to contain Jonathan Taylor and Derrick Henry over the last couple of weeks, we still don’t know if this success is sustainable.

Jalen Hurts vs the Blitz

Hurts has been on a tear this season and has had an answer for everything thrown his way. After being completely exposed by Todd Bowles in last year’s playoffs it seems as if Hurts has taken a vow to never let that happen again.

On Sunday, when the Eagles face the Giants, Jalen Hurts will be going against the top blitzing team in the league. It seems that the Giants have a new identity on defense with Wink Martindale calling the shots. The Giants have a blitz rate of 40.8% this season.

Luckily for the Eagles, Jalen Hurts has been pretty successful against the blitz this season as he has posted a completion percentage of 62% with 891 yards, 7 touchdowns, and 1 interception. Hurts has broken some records over the last two weeks so it will be interesting to see what he pulls out of his bag of tricks this week.

While the Giants may be without Leonard Williams this Sunday, they still have a couple of studs back there in Dexter Lawrence and even rookie Kayvon Thibodeaux. Wink Martindale’s philosophy has been to target the weak link of the opponent’s offensive line and to attack that as much as possible.

While the Eagles do boast the best offensive line in the league, they’re still far from perfect. Last week the offensive line had 7 false starts in their dominant win over the Texans. I would imagine that Wink would find a way to attack the interior of the offensive line. It could be a long day for Isaac Seumalo or Landon Dickerson.

Against the Titans, we saw something that has never been a common theme for the Eagles. Philly had two wide receivers over the 100-yard mark and one of these receivers had two touchdowns. Could it be another big day for that group?

We have yet to see them consistently move the ball like that this season. Jalen Hurts will have a nice task of going up against a depleted secondary so it could be another big day for Brown and Smith. This could be a key recipe for how to win in the playoffs and what better time to practice it than in a game against a divisional opponent?