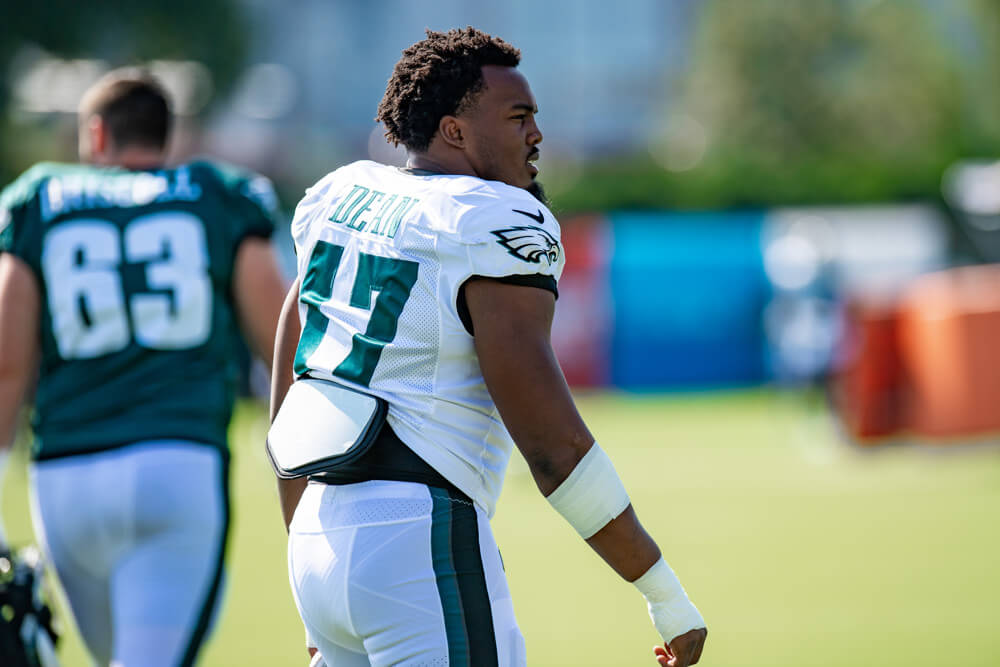 Nakobe Dean played his first significant stretch of snaps as an NFL linebacker when the Philadelphia Eagles defeated the Tennessee Titans at Lincoln Financial Field in Week 13.

The rookie third-round pick stepped in after an injury to starter Kyzir White. He played 15 snaps and recorded six tackles, tied for the most on the team. Five of them were solo.

White returned to the game after a short absence, and he is unlikely to miss any time. However, Nakobe Dean fits into the future of the Philadelphia defense, especially after the flashes he showed on Sunday.

Entering the matchup against the Titans, Nakobe Dean had played an increasingly important role on special teams in 2022, but his action on defense was limited to just four snaps.

He wasted no time taking advantage of his opportunity on Sunday. On his first defensive snap, he made a one-armed tackle on power back Derrick Henry and drew a holding penalty. His most impressive play came during the fourth quarter when he penetrated the Tennessee offensive line to take down Julius Chestnut two yards behind the line of scrimmage for his first tackle for loss in the NFL.

Even in just 27% of Philadelphia’s defensive snaps on Sunday, the former star at the University of Georgia showed the tendencies that earned him high praise from draft analysts this spring. Carlos Medina complimented how Dean “reaches the ball carrier and ends plays in explosive fashion” when he graded him as a first-round talent. Nakobe Dean showed that explosive ability when he hammered Chestnut in the backfield.

Jimmy Kempski also broke down the film from Sunday’s victory. Some of the trends he identified aligned with Medina’s evaluation. Dean handled coverage responsibilities well, closing on two short pass plays to tight ends in the flat to limit the Titans to minimal gains.

Kempski identified a play when Tennessee offensive guard Aaron Brewer got the best of Nakobe Dean, showing one validation of Medina’s concern about how Dean “can get swallowed up on the second level when interior lineman reach him” at times.

If you need the comfort of offsetting this instance of weakness during the rookie’s first extended NFL action, Medina made an interesting assertion before the Eagles spent the 13th-overall pick on Jordan Davis and the 83rd-overall pick on Nakobe Dean. The idea that the prospect linebacker would “benefit greatly from an NFL team with size up front to protect him” directly correlates to a strength of the Eagles and an organizational priority openly stated by general manager Howie Roseman.

Nakobe Dean Off the Field

The 2021 Butkus Award winner appeared on the John Kincade Show on 97.5 The Fanatic during their Giving Tuesday broadcast to benefit the American Association for Cancer Research last week. The relatively reserved young man just shy of his 22nd birthday spoke about his experience playing for the Georgia Bulldogs under Kirby Smart, how the revered college coach compares to Nick Sirianni, and the overall experience of the 2022 season in Philadelphia.

He gave the fans in attendance a thoughtful nugget by naming Jim’s on South Street, a business that unfortunately burnt down recently, as the best cheesesteak he’s had since moving to Philadelphia. He also identified an authentic advantage that the Eagles have over other NFL teams as the most impressive element of playing in Philadelphia.

“The way that Philly fans travel to games. It’s been a couple of away games that felt like home games. We’re louder than their fans, so it’s definitely been the fans and the way they travel,” he said.

Regardless of whether or not Nakobe Dean has bought into a harmless, trivial trend of local athletes “pandering” the fan base, it’s encouraging to see a rookie interact positively with fans in any setting. He also expressed a comfort level promoting charity work with 4 My City, an organization that provides food rescue.

Dean’s Future with the Eagles

Nakobe Dean has earned an increased role on special teams throughout his rookie season, and he will continue to get his opportunity to help the team on coverage units that hadn’t impressed anyone before their strong effort against the Titans.

If starters White and T.J. Edwards both stay healthy, they will take the overwhelming majority of the snaps at the linebacker position for a team in Super Bowl contention unconcerned about developing for the future.

Both starters will become free agents during the 2023 offseason. The Eagles will most likely retain Edwards, who has become their featured linebacker and a trusted cog of the defense who rarely leaves the field. White has made some key plays as a serviceable free agent acquisition on a one-year contract, but it’s realistic to think that Roseman might view him as an expendable player after investing a third-round pick in 2022 on an NCAA standout who projects as a three-down linebacker.

Expect to see Nakobe Dean in the starting lineup in 2023.