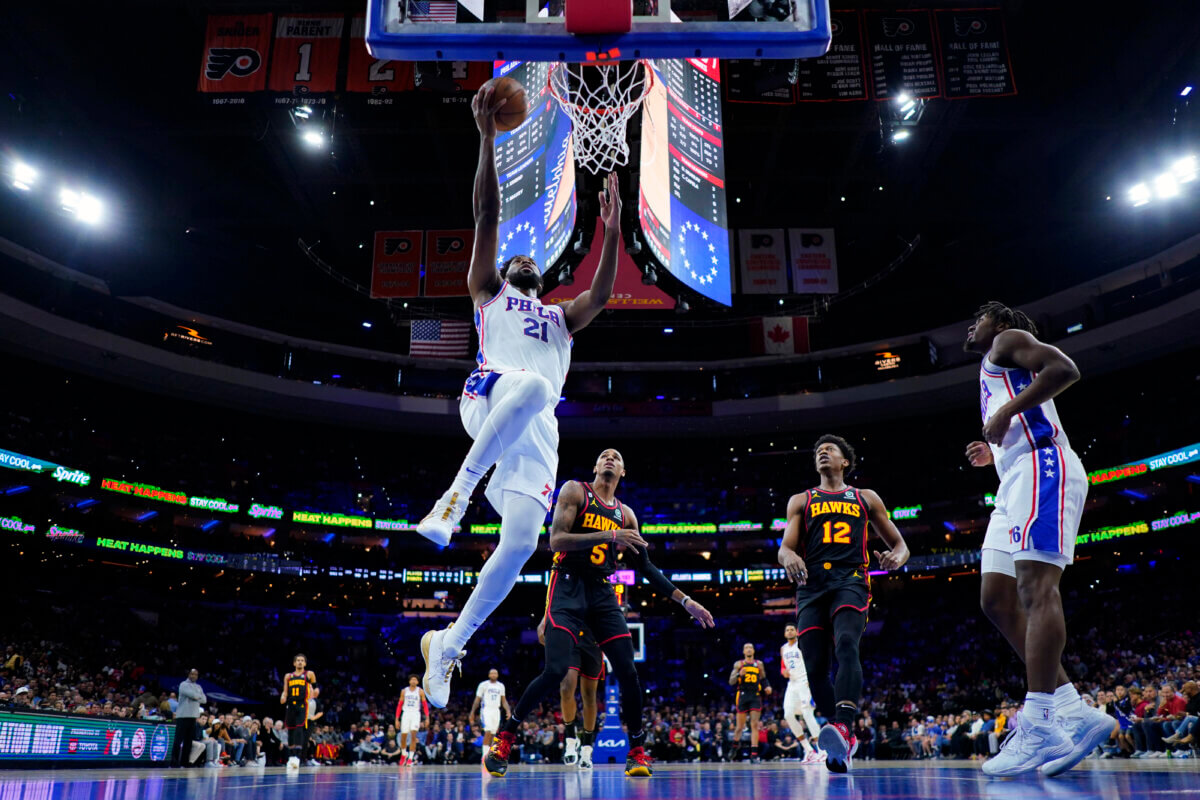 Philadelphia 76ers’ Joel Embiid goes up for a shot during the first half of an NBA basketball game against the Atlanta Hawks, Saturday, Nov. 12, 2022, in Philadelphia. (AP Photo/Matt Slocum)

On the back of one of the worst offensive performances the Philadelphia 76ers have seen during the Joel Embiid era, the Sixers bounced back to defeat the Atlanta Hawks behind Embiid’s 42-point effort.

Saturday night, the Sixers took on Trae Young and the Atlanta Hawks in the second game of a back-to-back. The first matchup of the two saw Philadelphia fall in what can only be described as an embarrassing, offensive performance.

With a chance to even the score, the Sixers would once again face the Hawks. This time, on their own home court.

The second quarter would not be as kind to Joel Embiid in particular (2/5, one turnover), but the Sixers would carry on, winning the quarter and building a 16-point lead heading into the second half (67-51).

Despite the Sixers’ double-digit first-half lead, the game was far from over. Atlanta would come out cold to start the third quarter but would find themselves and fight back, looking to overwhelm and overtake Philadelphia. They would nearly do just that.

Trae Young and De’Andre Hunter would lead the scoring effort, combining for 19 of the Hawks’ 33 third-quarter points. Though they would remain down by 15 points entering the fourth, Atlanta’s run was not finished yet.

Come the fourth quarter; the Hawks would find themselves within six after holding the Sixers to just four points over a five-minute run. For a time, it looked as though the Sixers might just let this game slip away, the repercussions of which, one can only imagine — some likely still are. Those thoughts were made irrelevant, though, thanks to the exhaustive efforts of Joel Embiid.

In an effort to secure the win, Joel Embiid played more than the final fifteen minutes of the game. During this, he scored 12 points as the Sixers closed out the Hawks. It wasn’t the scoring that saved the Sixers, though; it was the strong defensive performance by Philadelphia’s big man.

This is clearly not sustainable. Joel Embiid played 40 minutes tonight, and it was clear that he was nothing short of exhausted even as the fourth quarter began.

Some of this is due to his continued recovery from offseason surgery, plantar fasciitis, and the flu most recently, but that does not mean that it’s reasonable — or more to the point, wise — to play the oft-injured big so many minutes this early in the season.

With the Sixers set to play the second game of a back-to-back tonight, it would not be surprising if Embiid sat tonight to manage the burden of the long NBA season.

Hopefully, as the season progresses, the team will be more mindful of his minutes. If not, then they will potentially risk their championship hopes this season. So far, Joel Embiid is averaging a career-high 35 minutes per game.