Eagles move to 8-0 after slipping past the Texans 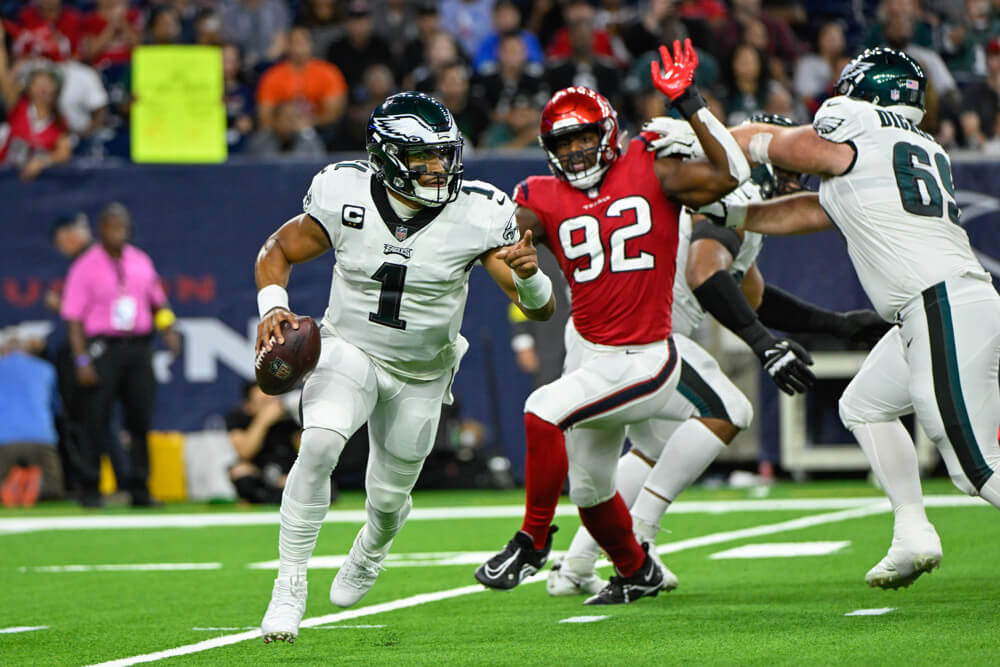 It wasn’t pretty, but nobody said it had to be. The Philadelphia Eagles are officially 8-0 after a 29-17 win over the Houston Texans.

The Eagles came out flat but it’s hard to really blame them. After returning from their bye week, they played an intense game against the Steelers in the Battle of Pennsylvania. On a short week, they then had to travel to Houston to face a one-win Texans team. This game had ‘letdown spot’ written all over it, but Sirianni was able to rally his troops to just about slip by.

As a result, the Eagles are now 8-0 for the first time in franchise history.

It didn’t take long for signs of rust to show. The offense was sloppy during the opening few drives and Jalen Hurts was lucky not to turn the ball over. But with that said, the team still found a way to go 91-yards and cap an 18-play drive with a 4th & goal conversion for their first touchdown of the day.

Their next drive was contrived of 8 rushing plays and a pair of screens and the ball still ended up in the endzone.

If the 2021 Eagles had come out that flat, it would’ve been embarrassing. This offense simply has too much talent and too much heart. That combination pretty much offsets any rust or sluggish play and it’s genuinely remarkable to see.

Jalen Hurts is soaring with the Eagles

Speaking of Jalen Hurts, he went 23/27 for 2 touchdowns and 0 interceptions. He wasn’t spectacular, but he was beyond efficient and made consistently smart decisions with the football. His awareness to take sacks as opposed to trying to force something out of nothing really helped him in a game that left him exposed to plenty of pressure.

The growth of Hurts as a passer is still almost scary to think about. He’s so confident in the pocket and the touch on those deep balls is almost totally different to what we saw in 2021. Hurts continues to establish himself as a viable MVP candidate.

I still cannot believe that the Saints let Chauncey Gardner-Johnson go for a bag of chips. He now leads the NFL in interceptions with 5 and has had at least 1 in each of his last 4 games.

His pick on Thursday night could not have come at a better time. The Eagles were struggling to move the chains and needed something to inject some life into them. CJGJ stepped up, snagged a Davis Mills pass from the sky and put the offense in a good spot to convert.

The Eagles punched in a touchdown within seconds.

This is easily Howie Roseman’s most prolific offseason, but the move to acquire Chauncey Gardner-Johnson really was the cherry on the cake and is paying huge dividends.

Miles Sanders is a man on a mission

Miles Sanders is running like a man possessed this year. His breakout demands an article of its own, so I’ll save the deep analysis for tomorrow, but 93 yards with a 5.5 ypc average is becoming an average day at the office for the Penn State product.

It’s not even the numbers, but how he’s getting them. Sanders is running through people as opposed to trying to bounce outside of them and it is making a world of difference.

Hopefully he and the Eagles can work out an extension because Sanders is flashing all the potential in the world right now.

Happy Halloween from ‘The gravedigger’

Javon Hargrave was a nightmare for Davis Mills on Thursday night, which is fitting given that Halloween celebrations are only just coming to an end. The former Steeler had 3 sacks on the night. This was the first game that the Eagles were without Jordan Davis so getting that kind of performance from your cornerstone defensive tackle became that much more important.

Hargrave was a force to be reckoned with all night long and really helped create opportunities for the rest of the defense to thrive.

The Eagles get to watch the end of the World Series and the MLS Cup before enjoying all the NFL action this weekend. They’ll be facing the Washington Commanders at home on Monday the 15th of November.