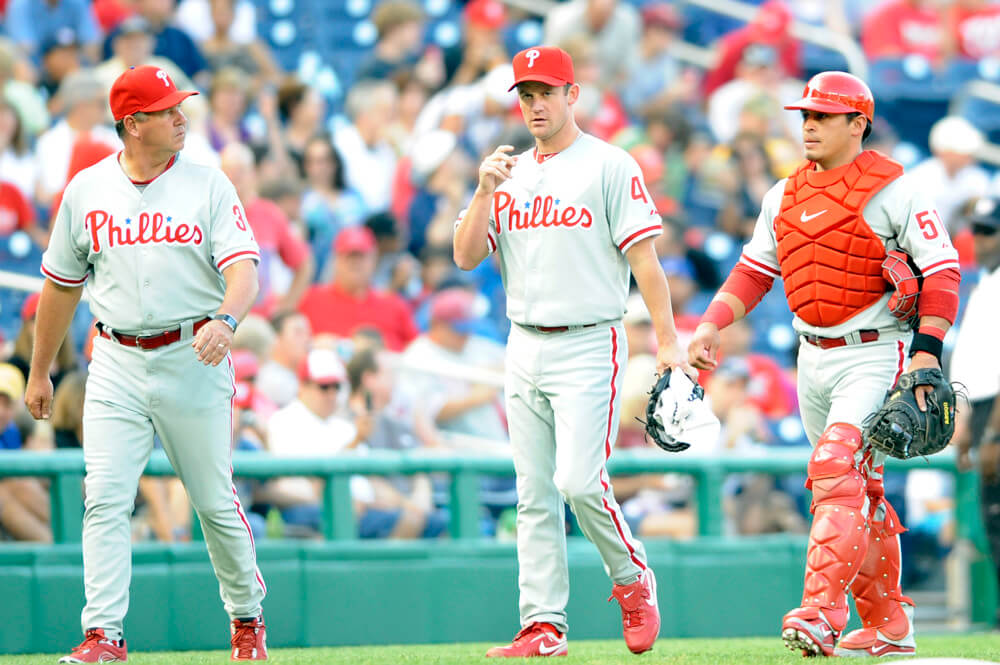 The day was August 24th. The Phillies were in an extra-inning battle with the Houston Astros, who at this point we’re still in the National League. The Phillies manager Charlie Manuel had drained his bench and as the game enter the fourteenth inning, there were not many options left. First baseman Ryan Howard would step to the plate with two runners on and two outs. A base hit would send the fans home happy and the Phillies would win the game. Howard would strikeout and give the home plate umpire an earful. This led to the Phillies’ first basemen being ejected from the game.

At this point, the Phillies did not have anyone left to play the field. Therefore, Charlie Manuel turned towards an unlikely hero. Starting pitcher Roy Oswalt, who was in between starts, would get the call to head out to left field.

The Other Roy the Phillies Had

Roy Oswalt had a 16-11 record in his two seasons in Philadelphia. Oswalt pitched to a 2.96 ERA and 166 strikeouts. Roy was a part of the “Four Aces” in Philly in 2011. He, alongside Roy Halladay, Cole Hamels, and Cliff Lee, formed one of the best starting rotations of all time.

Roy Oswalt was acquired in a trade with the Houston Astros in 2010. Oswalt was sent to Philly in return for starter J.A. Happ, infielder Jonathon Villar, and outfield Anthony Gose. Happ and Villar were regulars in the majors last season while Gose hasn’t appeared since 2016.

This trade by Ruben Amaro Jr. was a win for the Phillies at the time and still remains a win today.

Oswalt would be the Phillies’ left fielder for the remainder of the game. Roy would actually get an opportunity to make a play. A pop fly was sent out to Oswalt in left and he made the grab. The remaining fans at this game went wild and the team loved to see one of their aces make a play.