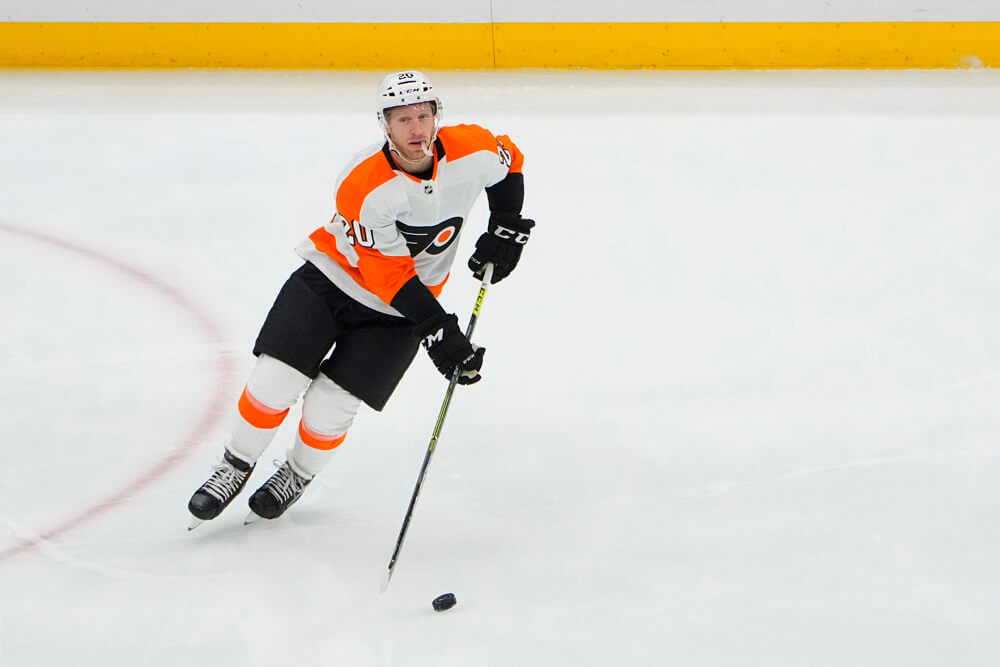 ELMONT, NY – JANUARY 25: Philadelphia Flyers Center Gerry Mayhew (20) controls the puck during the first period of the National Hockey League game between the Philadelphia Flyers and the New York Islanders on January 25, 2022, at UBS Arena in Elmont, NY. (Photo by Gregory Fisher/Icon Sportswire)

Ilya Samsonov has never lost to the Philadelphia Flyers.

He started tonight against Martin Jones, who earned a rare Flyers victory against the Washington Capitals in 2021-2022. The Capitals were favorites, but the Flyers played like they didn’t know the odds for 57 minutes. A monumental collapse in the final 3:03 of the third period shattered an otherwise solid performance.

Philadelphia is a team that needs to learn how to win. Like the Pittsburgh Penguins, another potential victory got away.

Starting hot, the Washington Capitals nearly scored out of the gate. Martin Jones made a few critical saves throughout the period.

The Philadelphia Flyers had an early powerplay opportunity. Michal Kempny served for tripping. The Flyers couldn’t convert, making one too many passes in the offensive zone instead of shooting for volume.

Kevin Connauton and Gerry Mayhew were noticeable. Connauton bailed out Keith Yandle in transition, pinching in the defensive zone. In the offensive zone, Mayhew looked natural. He skated with as much hustle, like running into the boards versus the Detroit Red Wings never happened.

Jones had to stand tall on his own a handful of times, turning away Conor Sheary and Garnett Hathaway. A final-minute dart from Kempny broke the scoreless tie. Kempny aimed at the point and scored with traffic in front of Jones with 1:25 remaining. Though Philadelphia paced the first period, the Capitals won on the scoreboard. Entering the second, Washington led 1-0.

Again, the Philadelphia Flyers paced the second period. Unlike the opening twenty minutes, it reflected on the scoreboard.

Scott Laughton and Trevor van Riemsdyk locked horns. The energy in the Wells Fargo Center was uncharacteristically electric for how this season is playing out. van Riemsdyk received the boot, and the Flyers went to the powerplay.

Keith Yandle was masterful on the powerplay. Before the faceoff, he made the plan to play through Gerry Mayhew. A non-subtle point to Mayhew gave the distinction. He made good on his strategy, too. Mayhew scored a powerplay goal with 11:06 remaining.

Then, Isaac Ratcliffe received a sketchy interference call. Cam Atkinson followed, serving for interference. Joe Snively scored on the 5v4 advantage with 7:11 remaining. He stayed with a couple of rebounds, netting the second.

Travis Konecny, our spotlight player, helped tie the game in the final minute, setting Travis Sanheim with the easy one-timer with :58 remaining.

When the Philadelphia Flyers flunked a 5v3 opportunity, it felt like the momentum was shifting to the Washington Capitals. Tom Wilson went knee-to-knee with Scott Laughton, earning the boos from the crowd.

A scrappy period kept the theme when Keith Yandle and Nic Dowd went to the penalty box after a small scrum behind Martin Jones. Moments after the 4v4 expired, Travis Sanheim found Gerry Mayhew on the crease again, scoring his second of the game with 3:51 remaining. Sanheim drove the wing, slipping the puck to Mayhew as he closed in on Ilya Samsonov.

“Sandy, for me, has so much ability on both sides of the puck.”

Then, the bottom fell out once Garnet Hathaway scored twice in a quick sequence. First, John Carlson shot from the blue line, but Hathaway received deflection credit with 2:57 remaining. Then, Hathaway was on the crease, burying a puck turned over by Ivan Provorov with 1:12 remaining. Suddenly, the Capitals led, 4-3.

The Philadelphia Flyers host the Carolina Hurricanes next Monday. The puck drops at 3pm.