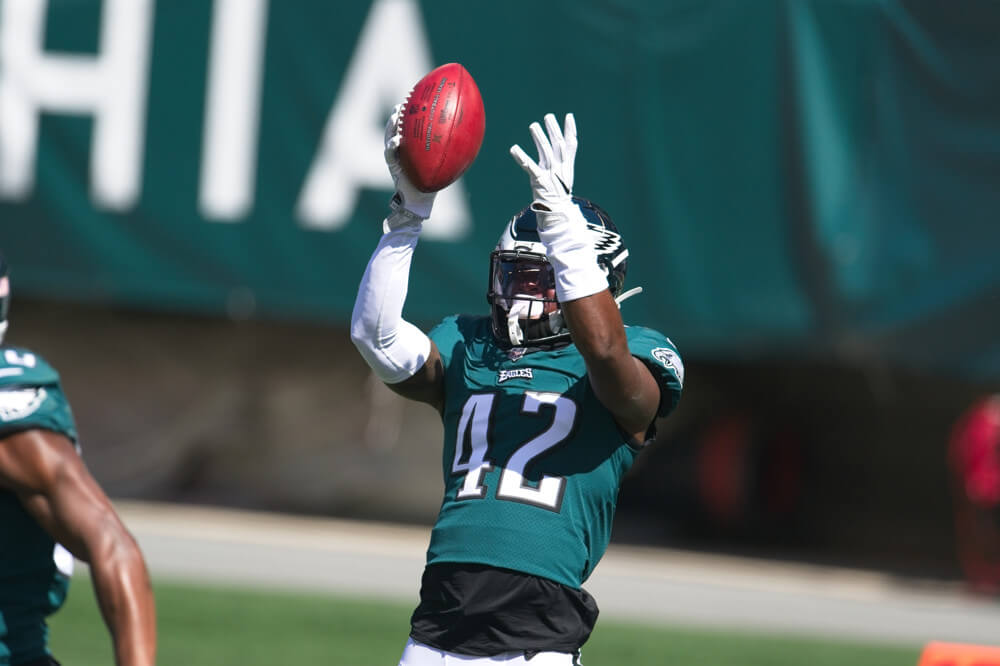 Monday was a chaotic day for the Philadelphia Eagles. From contract extensions to some potential free-agent targets, there was plenty of food for thought to be feasted on. What many didn’t expect on the other hand, was Jalen Mills to sign a three-year deal with the Patriots worth $29M. It was reported shortly after that Rudy Ford had also secured a shiny new contract with the Jaguars, leaving a Safety room that was already light on depth.

As things stand, the Eagles have three safeties remaining on the roster:

Rodney McLeod has become a cornerstone of the defense since first joining in 2016, but injuries haven’t been kind to the hard-hitter. The former Ram tore his ACL last season and is now entering the final year of his contract. This comes after he tore the ACL in his other knee back in 2018. While his play rebounded nicely one year later, but it’s tough to expect the same again. Not only that, but it’s not as though the Eagles are loaded with insurance policies behind McLeod, who is also entering his contract year.

Last year’s fourth-round selection had a quiet rookie season, playing in just 18% of snaps. Wallace is a versatile player who works best out of the slot or in the box, making him a perfect replacement candidate for Jalen Mills. However, it’s not like we saw an awful lot in his rookie campaign that showed someone ready for a full-time starting role.

There’s no denying his upside. If we compare his 2019 Clemson usage rates to the final year that Malcolm Jenkins played in midnight green, you can clearly see why the Eagles would be interested in giving him an expanded role.

But again, Wallace is still very young in his development and could benefit from a veteran taking the lead role while he rotates into sub-packages and slowly grows behind a Mufasa – The DeMeco Ryans and Jordan Hicks dynamic, if you will.

When we spoke to Grayland before his rookie season, he stated that the Eagles view him as a long-term FS option, which is oddly working out perfectly given the lack of depth behind McLeod at the moment. We started to see some more defensive snap exposure after the departure of Will Parks and the UDFA held up nicely. There’s a lot of potential held by the Baylor product, but like Wallace, it’s unfair to expect him to magically harness it all over one offseason and become a bonafide starter/serviceable rotational piece.

Marcus Epps was a special teamer who worked his way up to regular defensive snaps in 2020. He wasn’t perfect, but he did record a pair of interceptions and 47 tackles. Marcus Epps hits like a freight train but has a very raw skillset. He could be a fun player to watch develop and he showed that with some flashes of real hustle last year. But again, is probably some way off of being a first-choice option.

The Eagles were linked with former Rams safety John Johnson for all of 17 minutes before he signed a juicy deal with the Cleveland Browns. If Jalen Mills can get $29M, it’s going to be interesting to see what other top free agents can secure.

There are still a plethora of names to watch in free agency. Former Colt Malik Hooker is absolutely one due to his link with Jonathan Gannon, while Keanu Neal and Rayshawn Jenkins are also intriguing options. The worry here is that the Eagles don’t have the salary cap firepower to secure a big name on the back-end.

When it comes to the NFL Draft, the Eagles already have prominent needs to fill, likely meaning that they wouldn’t be looking to draft a Safety until round 2 or beyond. Trevon Moehrig is the name to watch at the top of the second round, but this isn’t a class that’s top-heavy with safety talent, with Hamsah Nasirildeen being arguably the second-ranked safety in this class and a potential third-round pick ahead of Oregon’s Jevon Holland.

It’s not like the Eagles are without viable options to replace Jalen Mills and Rudy Ford, but it’s a question of sacrifice. The franchise has limited cap resources available and if they decide to go all-in on a top free agent prospect, it will hurt other areas of the team. If they draft a Safety early over other areas of need, the same argument applies given that that they drafted Wallace last year and Arnold is also entering his second season.

It helps that the team’s new defensive coordinator is a former DB’s coach as it may play a factor in the emphasis placed on bolstering the secondary. How the team do that, however, is anyone’s guess.