New Year’s Eagles Mailbag: Who will be the starting QB in 2021? 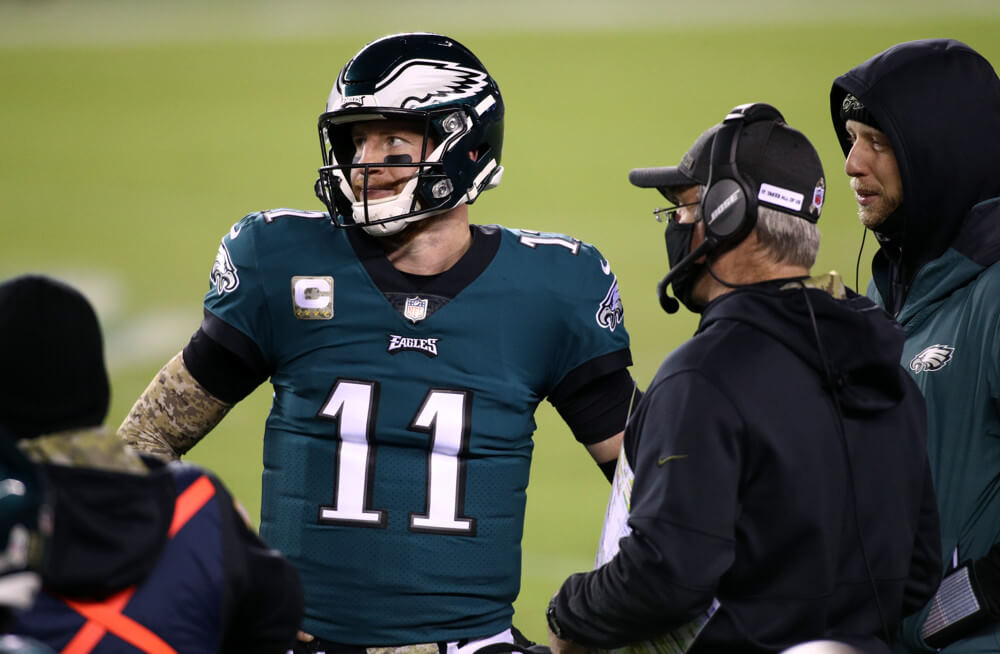 Happy new year everyone! I hope your 2021 is filled with happiness and opportunity. As far as the Eagles are concerned, I just hope it causes you a lot less agony than 2020 did.

To kick off the new year I wanted to do something I’ve very seldom done on this site, which is a mailbag to answer your questions! I’ll try to make this a weekly thing, so make sure you’re following my twitter @LiamJenkinsPSN if you’re not already!

Let’s get to the questions!

Which Eagles receivers stay on the team?

I think you have to look at it from a cap perspective. The Eagles need to shave close to $65M in cap space this offseason just to keep their heads above water. This likely means an overdue goodbye to Alshon Jeffery and a kind of sad farewell to DeSean Jackson. The duo combine for $28M in cap hit so I think it’s safe to say they’re gone.

We can also assume that any rookie drafted this year is safe for the time being. Quez Watkins has flashed in recent weeks, we’ve seen some potential from Hightower and Jalen Reagor isn’t going anywhere.

Greg Ward is a pending free agent though and this worries me. The Eagles should offer him a contract as he’s proven he has a long-term home as a slot receiver in this league. Whether they will or not is anyone’s guess, but I’d like to think they do.

As for J.J Arcega-Whiteside, spin the wheel and see where it lands. After two years in the NFL, Dorial Green-Beckham has more yards as an Eagle than him. Dorial. Green. Beckham.

I think it depends. There will be a lot of immediate help available inside the top 10 and the Eagles know that. Whether it’s another wide receiver, a CB2 and future CB1, or even another offensive lineman, the Eagles have options. I think they’d be open to moving given that they do still have a fairly strong foundation and could benefit from as many cheap, young players as possible…but I also think this is a draft they have to hit on and if they’re certain of a guy being that gamechanger, then trading away from acquiring him makes no sense.

I think it depends on the coach. The Eagles have made such a mess of this and if Pederson is still around, you have to believe that he can find a way to fix Carson Wentz. It comes down to an intense training camp battle that should never have been and in the end, Hurts probably wins it out after endless trade rumors and more anonymously sourced reports weight down on the NDSU product.

Do the Eagles want Dilly Dilly?

It’s important to remember that he’ll still only be entering his third NFL season, but he’s also a lot older than most people in his Draft class. There is 1000% still unexplored upside there and Dillard proved that in games against Buffalo and Chicago last year. But I really would be absolutely heartbroken for Mailata if he lost the starting role based on draft position alone because the Aussie’s development has been unbelievable.

I think Dillard can still develop nicely, but whether it’s as a starter or not should be a legitimate question.

If the team can keep hold of Alex Singleton (which involves actually paying a linebacker), then his development for sure. I was extremely high on his CFL tape when the team first poached him and watching him grow into a three-down linebacker has been a joy to behold.

I think the Eagles do have a lot of untapped potential. Both John Hightower and Quez Watkins could be fun speedsters to watch in a fixed offense and Josh Sweat is only getting better at defensive end.

As chaotic as Howie is, I do think that drafting another QB that high would be the most idiotic thing the team could do and the fact it’s even feasible is a real shame. The front office should not have put such an emphasis on this QB conveyor belt.

They will probably take one in the later rounds. They were high on James Morgan out of FIU this past year and keeping Nate Sudfeld around has proven to…yeah I’m out of reasons. Drafting a project arm makes sense but I can’t see them just shooting for the stars again…yet.

That’s it for this weeks’ mailbag! Make sure to drop a follow on twitter and keep your eyes peeled for the next one!