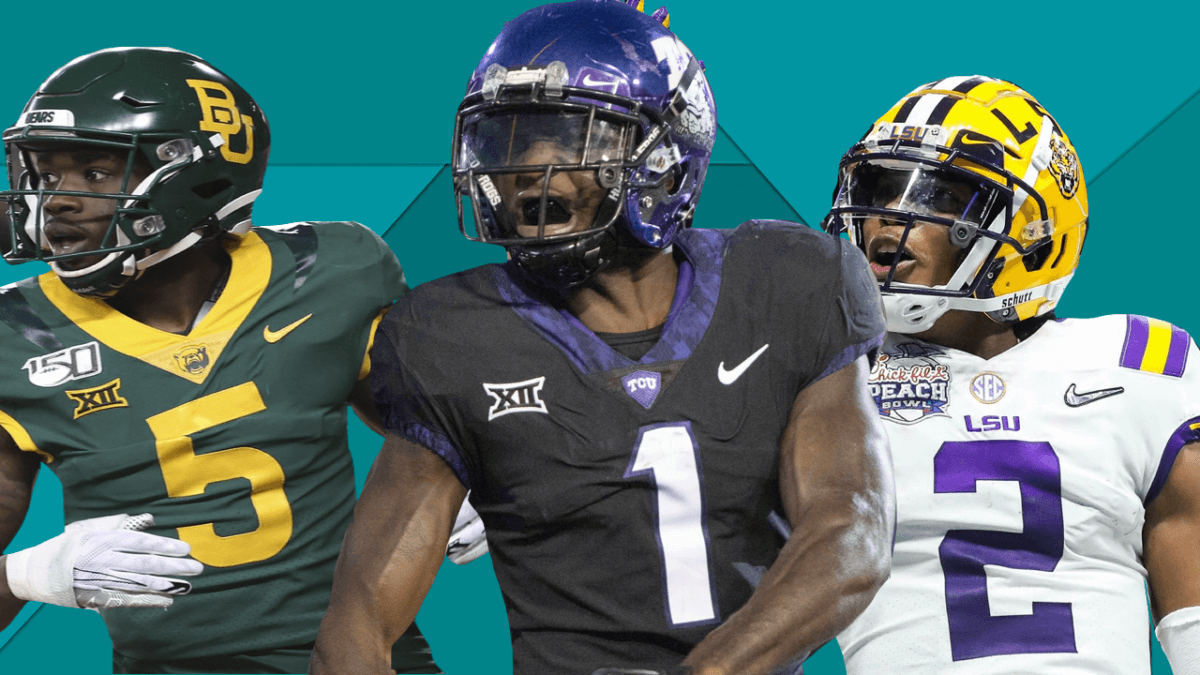 The NFL Draft is a few short weeks away and anticipation over who the Eagles will take at 21 is seriously snowballing. All the excitement pertains to the wide receiver position and good reason. But, as we know, this class is stacked from top to bottom with pass-catching talent. So, who truly is the best option for the Eagles? Not the best receiver. Not the one with the highest upside. Not the fastest. Who fits the Eagles the best?

I decided to watch 3 games of around 25 receivers in this year’s class in order to create a top-20 ranking and tier system that’s based purely on the traits that the Eagles covet at the position. The idea being that we can then see value in certain traits and contingency plans if one of the bigger names is snagged from the clutches of Howie Roseman.

Before we get into it, here’s the criteria I was grading:

Is the receiver able to get off the line of scrimmage quickly? When fighting press-coverage, how is their hand-usage and footwork? Can they maintain balance when pushing through a ‘jam’ in order to keep generating momentum into the stem?

Breaking – Change of direction, sinking into and bursting out of cuts. Selling vertical routes with your head and feet in order to get the DB to bite and open his hips.

Leveraging space- If it’s zone coverage, are you able to peel off into holes between defenders and anticipate their movement in order to find the best window for your QB?

This one’s self-explanatory, but is focused on ‘play-speed’ and not a 40-time. Incorporating YAC ability and ability to change gears during a route gives a much cleaner definition to the naked eye.

Contested catches, strength at the catch-point, catch-radius, ability to ‘climb the ladder’ and use athletic gifts to catch with hands as opposed to relying on your body,

We all know Carson Wentz makes his paydirt outside of the pocket, to expecting a receiver to adjust for his QB on a scramble drill is really important here. Can the receiver not only adjust his body for the catch, but his route, his direction, and his positioning if needed?

This is so underrated. The Eagles do like receivers who can block in order to pave open the lanes for their dominant ground game. Physicality also includes play strength. Do they get swallowed at the line when facing press? Are they aggressive or conservative at the catch point?

Bryan Edwards is a sleeper that seems to be capturing the hearts of many and I think it’s easy to see why. He’s about as well-rounded as they come and his ball-production and adjustment skills are just a little ahead of Quintez Ceephus (who I also really like). Both of these names should be available on day 3 if the Eagles decide to double down or simply want a budget option with a relatively high upside.

I wasn’t impressed with Isaiah Hodgins at all.

This tier is really interesting. Three receivers tied for a score of 41. Two were slot guys and then Tee Higgins, who is another name that is being thrown around frequently. This is where the ranking really takes its own form, because it comes down to trait-value. Higgins just doesn’t fit that prototype despite being an intriguing prospect, but makes up for that with a superb catch-radius, keeping him in the running.

I’ve had a draft crush on Duvernay for quite some time, but his stiffness as a route-runner may come back to haunt him. This year’s slot receiver class is exceptional (as we’ll later discover), but I think both Davis and Duvernay could be great mid-round options if the Eagles go for an outside receiver early on, even if it’s just to bring Greg Ward Jr some competition and rotation.

Michael Pittman Jr. graded surprisingly low here, but I think it’s purely because he doesn’t have the juice that the Eagles covet so heavily this offseason. He’s probably got one of the more extensive route-trees in this class, but it isn’t the most polished. He is a really well-rounded receiver however, but again, this is based on traits that the Eagles are searching for, not overall talent.

Quartney Davis is the latest (hello Trayveon Williams) Aggie skill-position player to steal my heart. If it’s speed the Eagles cover over the middle, Davis is a time-bomb just waiting to go off. He’s explosive off the line, saucy in his cuts, and is a very nuanced route-runner. I’d love to see him drafted by the Birds.

There’s a lot to get through here so let’s run from bottom to top.

Antonio Gandy-Golden blew everyone away at the Senior Bowl practices and his tape is just as impressive. It’s contextual and there is a worry that there may be some bumps and bruises when transitioning to the NFL, but the raw traits are all there. AGG is the sort of player who could be an absolute steal in the heart of the Draft because of this.

Shenault is definitely the wildcard here. A lot of people view him as a second-round pick who does have some injury concerns, but none of that played into what we saw on tape. It’s so, so frustrating because the only knock on what is truly one of the most dynamic skillsets in this year’s draft, is that he has some real concerns in terms of physicality. He doesn’t want to block, shies away from contact, and can get smothered as a result. If he even so much as ‘tried’ to block or thrive through contact, he’d be a top tier-2 receiver in this ranking. He’s got everything you could possibly want in a receiver and his ball-skills are among the best in this year’s crop. I think the Eagles could absolutely be in for Shenault and I wouldn’t be mad at all at the pick. I just wish so badly that his physicality was a little less lacking.

I LOVE Van Jefferson. Our writer Thomas Peterson profiled him recently in an interview and with a footballing pedigree in his family, it’s easy to fall for such a crisp route-runner. He’s easily among the crispest runners in this class and as well-rounded as you’ll find, with the versatility to line up everywhere. The Florida product would be an absolute steal on day-2 if we’re to by these traits alone.

John Hightower is this year’s Andy Isabella for me – a player I fell hopelessly in love with within one game of tape. He’s definitely a sleeper but he just does everything well – not exceptionally well, but well. And considering that he’s likely a day 2-3 pick, to be graded this high says a lot.

Brandon Ayiuk is a fringe first-rounder (Hey, Adam Caplan, how you doing?). He’s an electric playmaker and lethal in open space, but where he lacks is his route-running and working through contact. I love his game and he’d be a great slot option for the Eagles…if not for one man.

Oh, KJ Hamler – you absolute enigma. How can one be so damn rapid, so explosive, so crisp in his routes, and then be so poor physically? It breaks my heart. He’s EVERYTHING the Eagles want in a receiver, but there were so many times during contested catches where he’d just accept defeat and shy away, or end up being thrown to the ground like a ragdoll when blocking, that it reminds me of Donnel Pumphrey 2.0. He will leave you purring in open space and he’s genuinely electric, but…UGH it could be so much more.

The choice between Aiyuk and Hamler comes down to one thing. Do you want less speed and more physicality, or less physicality and more speed with drops, etc being a natural correlation?

It’s getting saucy. 0.5. That’s all that separates Mims from Reagor, with the latter leading the tier in grading. Why?

Mims may have the highest ceiling of any receiver in the NFL Draft. He’s got ‘star’ written all over him if he lands with the right coaching staff and those mitts should have an onlyfans account. But his route-running technique is far from perfect. It’s to be expected, he’s a big boy and is never going to be a finesse route-runner. But there’s no ‘gear change’ when changing direction. He doesn’t sink into cuts and burst out of them and he ran go-routes 43% of the time last year. If you watch the conference championship game against Parnell Motley (Oklahoma), you get a taste of how NFL corners will try to shut him down. Mims is ridiculous at the catch-point, but he has to be…because most catches are contested and that has to be noted.

Reagor, meanwhile, has a lower ceiling but comes out of college with a higher floor. That route-running is *chefs kiss* tremendous. He carries speed all the way through and is a threat at all three levels. The footwork is scintillating and he understands the nuances needed to thrive at the NFL level He tracks the ball well and is eyebrow-raising at the catch point. The decision between the two comes down to one thing – trust in the Eagles WR coaching staff. If you believe in Moorhead, Mims is your guy. If you want a bigger chance of instant production, it’s all-in on Reagor.

Justin Jefferson is the most complete slot receiver in this year’s draft, purely because he has that aggressive mindset that some of the others lack. He’s quick, eccentric, and fluent in his routes…but there is a concern that he hasn’t faced much press in his career which could limit his ceiling.

CeeDee Lamb is my WR1 and it’s not even close. It’s crazy to think about just how good he could be at the next level. He throws people to the ground as a blocker, but has some ridiculous hops and exceptionally clean route-running on his side as well. His tape is nothing short of mouth-watering.

Jerry Jeudy and Henry Ruggs are extremely similar with only minor differences separating them. Ruggs is basically roadrunner and nobody is going to match his speed, but Jeudy has an edge in the stem of his routes by being a little more physical. It’s really splitting hairs, but Jeudy just offers a fractionally more complete receiver, while Ruggs brings that Tyreek Hill level ‘scary’ to the table.

So, which receiver best fits the Eagles?

It all comes down to what they’re willing to spend. But when the pick is announced, this grading should act as a rough guideline to schematic value.