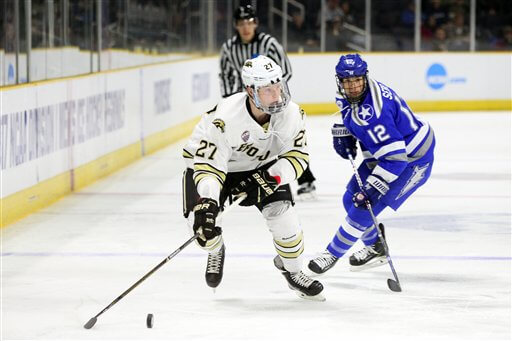 After four seasons at Western Michigan University, right-winger Wade Allison has signed an entry-level contract with the Philadelphia Flyers. “The Professor,” in the 2020-2021 season will be on the same AHL roster with David Kase and Maksim Sushko with the Lehigh Valley Phantoms. Allison played 26 games this season and scored 23 points. It was his third-best season with Western Michigan University. His best was his sophomore season, just like Tanner Laczynski.

Wade Allison was drafted in the 2016 NHL Entry Draft in the second round, pick 52. He’s more of a playmaker as his college career will support, finishing his senior season with 10 goals and 13 assists. He had his most efficient season on the ice, finishing with a +/- of 11 in 2019-2020 with Western Michigan University. Standing at 6’2″ and 205lbs, Allison presents greater size than Nicolas Aube-Kubel and David Kase. His size is on par with Jakub Voracek, so “The Professor” looks like a pro hockey player.

There is a grand opportunity awaiting Wade Allison. He could battle for playing time on the Philadelphia Flyers roster in 2020-2021. On the Flyers roster at the right-wing position is Jakub Voracek, Kevin Hayes, and Nicolas Aube-Kubel as the pure right-wingers. David Kase, who has a year left on his deal with Philadelphia, has earned six games of playing time and produced a goal. I don’t believe Chris Stewart will be re-signed to the Flyers for 2020-2021. This leaves a clear path for Allison to show up in Orange and Black in 2020-2021.

The 22-year old right-winger was the alternate captain over the last two seasons with Western Michigan University. He is the seventh player of the ten drafted in the 2016 NHL Entry Draft to be under contract with the Philadelphia Flyers. Four of those seven players have made their Flyers debut, including German Rubtsov, Carter Hart, Carsen Twarynski, and Connor Bunnaman. The entry-level contract is a two-year deal at a $925k cap hit and $1.13 AAV. Welcome to Philadelphia, Wade Allison!