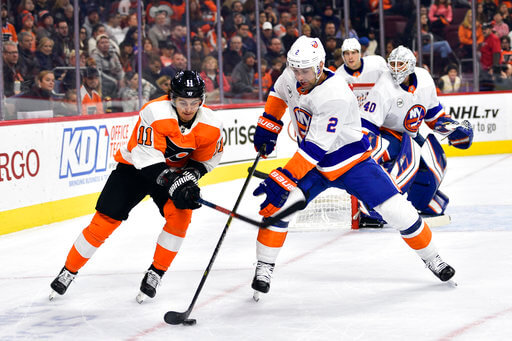 The Flyers have come out slow for the past few games, and this was no different. Voracek was being physically dominated for a majority of the period, going hard into the boards around the 1:00 mark, and skating slowly back to the bench. Gudas maybe had the play of the period when he blocked a great shot around the 2:15 mark.

The Flyers started hitting their stride about two minutes later, with a flurry of chances and a few great sequences, but nothing to show for it. After their offensive chances subsided, Neuvy made a bad play behind the net, almost leading to the Islander’s first goal. A minute or so after that, the Flyers got their first crack at the powerplay.

A little after the midway mark, the Islanders broke open the scoring with Leo Komarov netting his second goal on the season. Almost two minutes later, and Anthony Beauvillier pots another one, putting the Islanders up 2-0.

The last significant happening of the first period was Ivan Provorov catching Matthew Barzal with his head down coming across the neutral zone. That sparked a scrum, and Jordan Eberle caught a minor for roughing. That powerplay for the Flyers ended much like their first.

Six seconds into the period and Shayne Gostisbehere is called for delay of game. The Flyers killed the penalty off and looked decent doing so. At about the 5 minute mark, the Islanders’ Brock Nelson netted his fourth of the year, and the Isle’s third of the game. About a minute and a half later, Jori Lehtera answered with a goal of his own, cutting New York’s lead to two goals at 3-1.

Jake Voracek took a high sticking call, the Flyers had a few chances that looked pretty good, but the period ended with the Flyers still trailing the Islanders 3-1.

Well, here’s where the story gets even worse folks. Adam Pelech, Brock Nelson, and Anders Lee all score in the third, with no answer from the Flyers. Voracek took another high sticking penalty, and the players appeared to be going through the motions as the game wound to a close.

Michal Neuvirth returned to action tonight, and allowed six goals on 22 shots for a .714 save percentage. Not exactly what the Flyers needed at this point in time. Christian Folin looked like a wrecking ball out there, especially when he went after the hit instead of the open man which led to an Islanders goal. Travis Sanheim, who has been a constant source of decent-ness for the otherwise dreadful blue line of the Flyers, made a costly mistake, laying out to prevent Brock Nelson’s second goal of the game. However, it didn’t prevent Brock Nelson’s second goal of the game, and it put the Isles up 5-1.

The Flyers are playing some dreadful hockey right now, and if things don’t change quick, it could get worse for the orange and black. Corban Knight went down with an injury, which means the team may need to call somebody up with Michael Raffl and JVR still out.

The Flyers have a 2 game West coast road trip coming up, starting with Anaheim Tuesday night and San Jose next Saturday. Expect an announcement soon as to whether someone will be called up for those two games if Knight will be out for them as well.