Three Reasons why Travis Sanheim Should make the Flyers roster 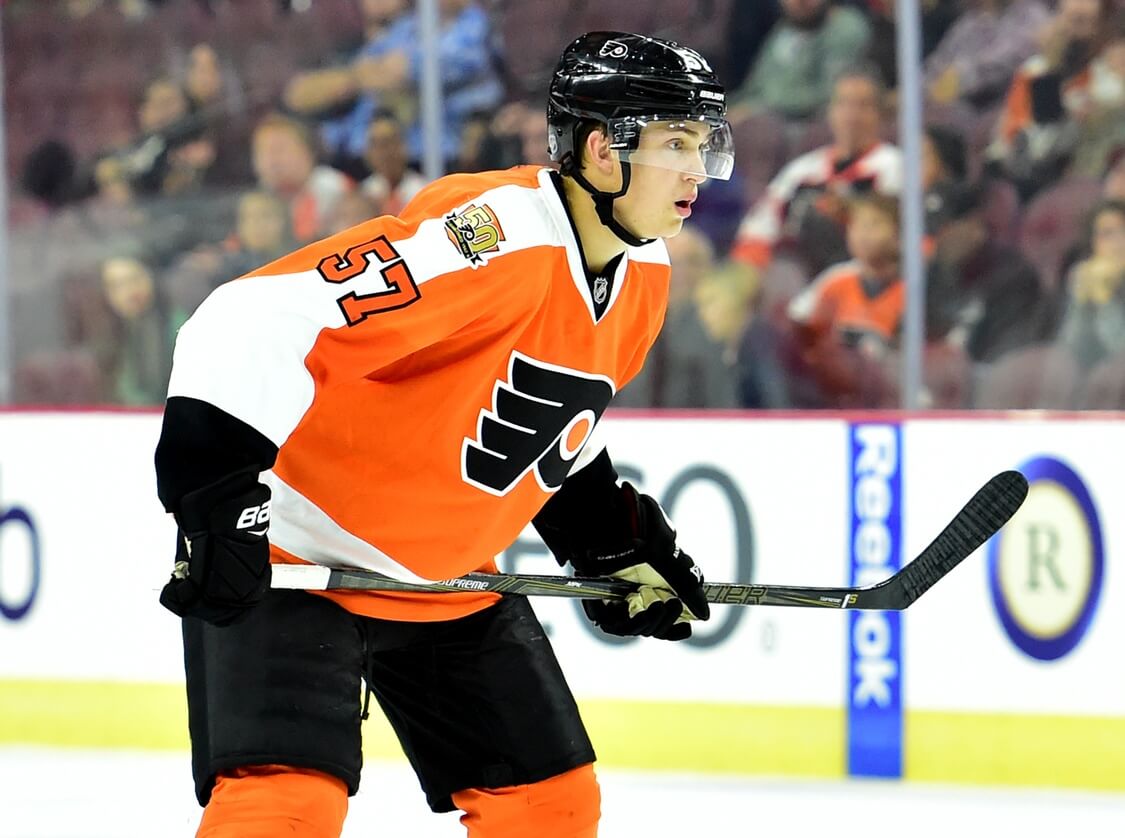 The Philadelphia Flyers are rocking and rolling like the “Rolling Stones” this pre-season. Once again the Flyers are showing off their great farm system assets, as they are proving to the NHL world why they were voted by hockeyinsiders.net, as having the best farm system in the NHL.

You want to see stellar competition at training camp? Look no farther than Samuel Morin, Robert Hagg, and Travis Sanheim who are all vying for two (Possibly Three Depending) defensive spots on the opening night roster. The youth infusion is in full force with the orange and black, and it starts with these young defensive studs. Here are my three takeaways as to why Sanheim should definitely make the big club this fall.

Sanheim was born on March 29, 1996. He was drafted 17th overall by the Flyers in the 2014 NHL Draft. He has really developed a nasty shot, to go along with his good skating.

This young crafty defenseman knows how to put the puck in the back of the net. Thanks in large part to Sanheim’s skating. He managed to register 10 goals, and 27 assists for a total of 37 points for the Lehigh Valley Phantoms, in 2016-17.

The former Calgary Hitmen product, Sanheim looked shaky in his first pre-season game, which is normal for a young defenseman. However, the last three games he has been phenomenal. Sanheim scored both goals against the New York Rangers on Monday night, bringing his stat line to 3 goals, 3 assists, and a plus 4 in 4 games played. Head coach Dave Hakstol was very pleased with Sanheim following last week’s contest against the Boston Bruins.

“One of the things he’s good at is getting up into the play, and his skating ability allows him to get there. … And I thought he had a pretty clean game defensively. A lot of that comes from defending well and making a good first pass. He’s just a more confident player than he was a year ago.”

One of the most impressive career stats for Sanheim, is that he is a Plus 79. This dates back to his first junior season in 2013-14 for the Calgary Hitmen. Moreover, being a plus player means that Sanheim doesn’t chase the puck very often. He allows the plays to come to him, and as a plus player your doing good things.

Sanheim was a career high plus 7 for the Phantoms, in 2016-17. He would smother opponents in their tracks before they gained entry into the Phantoms zone. Sanheim’s  defensive proweress played an intrical role with the Phantoms making the playoffs last season.

Let’s take a look at the final Corsi ratings for Flyers defensemen. Second year blueliner Gostisbehere had the highest Corsi rating finishing with 53.7%. To no one’s surprise, MacDonald finished with the worst Corsi Rating for a Flyers defensemen with 48.0%. Although, a Corsi rating is not contributed to takeaways and giveaways. A player with a lower Corsi rating often finds themselves chasing the puck more. It also places the team more often in defensive situations.

Sanheim is a world of talent, who has a defensive upside. From what we have seen of him throughout this pre-season, Sanheim could really help out with transitioning out of the Flyers zone on a nightly basis. This has been an area of concern for the Flyers in years past, thanks in large part to Macdonald.

This young stud defenseman cannot hide in the Phantoms system no longer. Sanheim has outplayed Macdonald in almost every facet of the game this pre-season. Will Sanheim make mistakes if he makes the big club in the fall? Of course he will, but how many more passes are we going to give Macdonald. The time is now for Sanheim to make the final roster.