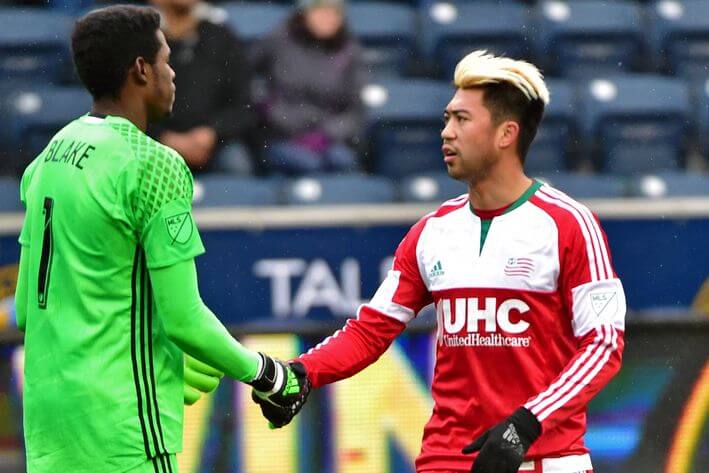 Philadelphia is a tough city. The people are scrappy at heart. Philadelphians have a resilience unlike any other people in this nation; they get hit, hurt and beat down, and still find ways to keep going. This lifestyle of the people is getting reflected by their professional soccer team. The Philadelphia Union have been a good team this year, but over the past month they have hit a bit of a road block. They lost first place thanks to some lackluster results, and have had trouble on the road. To stay relevant, the Union had to get a good result against their bitter rivals New York Red Bulls.  Resilience and road tests will determine if this Union team is going to stay consistently good, or if they’re going to fall to the middle of the pack.

The Union played against the Red Bulls Sunday night in a game that would be for outright second place in the eastern conference. NYCFC won their match earlier on Sunday and kept the top spot. Talen Energy stadium was full, and the Union fans were ready to witness their team beat New York for the first time in league play this season. However, the Union fans probably were not happy with the first half.

The Union could not find much of the ball in the first half. The Red Bulls only lost the ball in the Union’s half of the field, and when they lost the ball they pressed the Union into making bad decisions with the ball. Many times the ball would be at the feet of the Union defenders and they were forced into bad passes and turnovers. The worst one occurred in the twenty-seventh minute. Union centerback Ken Tribbett was on the ball about 10 yards outside of his own box. He was hounded by NYRB winger Mike Grella. Grella forced him towards another Red Bull player; striker Bradley Wright-Phillips. He stole that ball and had a two on one with only Marquez to defend for Philly. An easy pass to Sasha Kljestan to beat Marquez and an easy finesse shot to beat keeper Andre Blake gave the Red Bulls the early lead. The Union would concede once more before the half.

This time the Union gave up a foul in a bad spot, and the Red Bulls have had some great set piece goals this year from free kicks. New York is probably the best at misdirection on free kicks. They line up four or five players around the ball and then all but one run over the ball. This seems like it shouldn’t cause too much confusion,as the ball is not moving, but it does. Defenders and keepers flinch every time someone runs over the ball and doesn’t hit it, even if they knew it was coming. That is exactly what happened on the Red Bulls second goal. Two New York players ran over the ball, causing the wall of Union players to flinch or move. When the third Red Bull player hit the ball the wall was disjointed. The ball hit a Union player and bounced past Blake into the open net.  The Union found themselves down 2-0 at the half, and things did not look good at all!

The Second half came and the Union came out much stronger. They got the ball and attacked all half. The Union peppered the goal with shots, and sent in dangerous crosses all half. The first one that really counted was in the sixty-fifth minute. Keegan Rosenberry got involved in the Union attack, and sent a cross into the Box. Chris Pontius beat his man, and was in position to hit the cross first time into the net. The Defender Sal Zizzo hit Pontius in the back, and the referee called a penalty. For this spot kick CJ Sapong stepped up to take it. He ran up and hit it with power right down the middle; the keeper Robles dove to his right thinking the ball was going that way, and the Union were on the board.

Less than a two minutes later the Red Bulls gave the ball away, and Rosenberry played a ball behind a defender to a streaking Fabian Herbers. Herbers ran down the right-wing, and cut into the box. He sent a low cross through the six yard box. CJ Sapong ran through the middle of the box drawing two defenders but he couldn’t connect with the ball. The ball was loose, and Chris Pontius ran into the box. He tapped it home for the tying goal, and the stadium erupted! The Union tied the game and were them more dominant team throughout the second half.

The Union soon found themselves short-handed thanks to a red card given to Ilsinho, but the Union stayed resilient and kept pushing for goals. They were close plenty of times but couldn’t find the go ahead goal. The game ended 2-2. The Union were so resilient in the game that even a man down forced the Red Bulls to sub off a striker and bring in a defender. Philly’s fitness and resilience helped them get a result, and forced New York to give up all hope of winning a game they probably should have put away in the first half. The Union now go on the road this week to play New England in the US open cup, and go to Canada on the weekend to play Montreal. The Union need to find a way to correct their past woes on the road.

The US Open Cup game is in New England, but not at the Revolution’s normal stadium. The game will be held on Harvard University’s campus field. This could bode well for the Union. The Union have not done so great on the road in the past few games, so a more”neutral” field could get the Union rolling on the road. They don’t have to worry about going into another teams “house”, they have to play them at a smaller venue. If the Union can survive and advance past New England they will reach the semi-finals of this tournament four times in the last five years, and will boost their confidence going to Montreal this weekend. The Union are playing a very different New England team than the one they beat 3-0 early in the season. Kei Kamara now bolsters their attack, and they have put together a few good results recently. The Union take on New England tonight at 7:30 EST, the game will be streamed on YouTube. Let’s see if they can bring their resilience to Harvard and get the win, and the confidence they need to get even more wins on the road!