Op-Ed: Phillies fans, and all of Philadelphia, deserve all of this 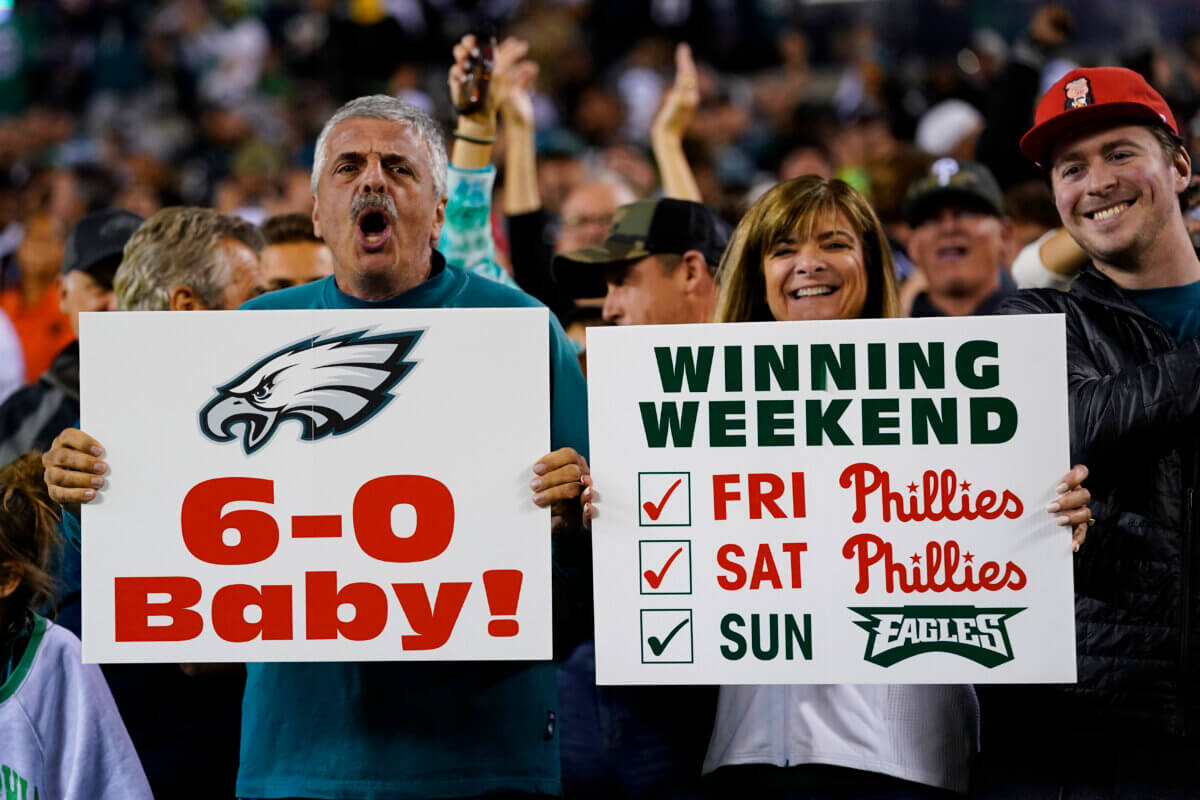 Philadelphia Eagles fans display signs for the undefeated Eagles and the Philadelphia Phillies after an NFL football game against the Dallas Cowboys on Sunday, Oct. 16, 2022, in Philadelphia. (AP Photo/Chris Szagola)

“Alright, (the Phillies) pitcher’s up to bat, I’m gonna go to the bathroom.”

And dammit if he didn’t.

I was 13 in 2008. Eighth grade, and outside of school only really cared about cute boys and Friday nights when they had the DJ at the Oaks Center Ice Rink (if you know, you know). In full-blown teenage-hood — and we all know at that age– we couldn’t care less about spending time with our parents.

But 2008 was different. I didn’t watch much baseball before then, or at least was too young to remember much of it. But I watched the ‘08 Phillies World Series run with my dad every night. I was young and it was way past my bedtime, but he let me stay up anyways. It was a bonding time for us.

See, my dad has a lot of health issues and couldn’t do most things with me growing up. When diabetes gets really bad, you lose sensation in your feet and can’t walk too well – especially on the uneven surfaces where I spent my childhood, like soccer fields and beaches. A lifetime of cigarettes and soda made him get out of breath just going up the stairs. I grew up outdoors, making it tough to connect.

So, Phillies baseball was our time. We relished in watching the games together. We cheered the hits, mourned the strikeouts, and laughed at the name Eric Hinske (sorry dude, it’s not personal). It was one of the most special family memories of my life.

But after 2008 came a lot of turmoil. Just like millions of other families, the recession caused mountains of strife for my home. We moved around a lot, employment and housing were unsteady and uncertain, and naturally, his health issues worsened.

Most of my anxiety stems from some of what we went through between 2008 and 2022. It never made any sense. What did my family ever do to deserve so much turmoil? In some ways, it still doesn’t.

But, things are different now. This past year, both of my parents made some serious changes and as of this fall are the healthiest they’ve been in 35 years – longer than I’ve been alive. They’re safe, stable in their home, and will be able to retire one day (something I never was sure would be possible).

Obviously, my own family’s journey has nothing to do with the Phillies. But I think it’s reflective of a much deeper psyche that makes this city – and our sports fanbases – who we are.

We aren’t New York or LA or whatever glitz-and-glamor city folks are moving to nowadays. People don’t come here to start anew and find themselves. We’re a city of regular ol’ folks who wake up in the morning, grab a cup of coffee and the paper from our local Wawa, and go to work for our often blue-collar or service jobs. Philadelphia is consistently ranked one of the poorest cities in America. Most of us are just trying to make ends meet.

So, we don’t have much. But, we have our sports teams. The Phillies, Flyers, Sixers, Eagles, and Union. And we’ve watched those teams crawl their way out of last-place finishes, heartbreaking losses, and a national media that wafts between laughing at them and vilifying them – and still bring home the championship trophy.

We’re used to hearing no, to being counted out, to not expecting good things to happen to us. Dancin’ on our own, indeed. But we’re here. We made it. And that’s a message of hope that resonates with a lot of Philadelphians.

So for anyone who’s ever looked at us and asked – why are they like that? Why are they so fanatical about their sports teams to the point of seeming obnoxious? Why are they so putting on literally seismic-level celebrations over playoff games?

This is why. Because 90% of the time, people in this city are struggling. We can be miserable, and it shows. So when the teams we’ve watched and built memories with our family and friends since we were kids overcome every possible obstacle to success, it unlocks something deeper in our souls that many of us didn’t even know was there.

The Phillies, our team, continue to fight and are hanging on for one more day.

Maybe, Phillies fans, we can too.