The Phillies’ starting pitching staff could face major problems beyond 2022 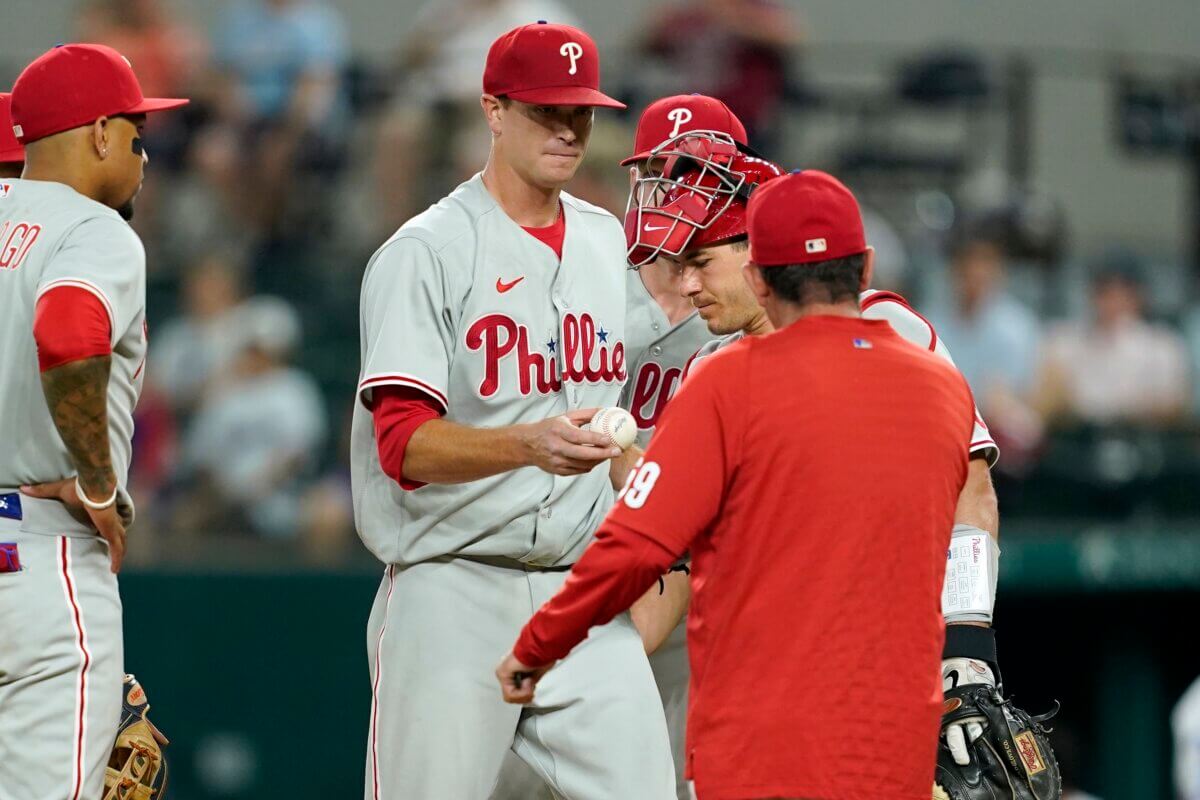 The Phillies’ starting pitchers have been putting in an impressive performance as a collective this season. Over the course of the first half, the Phillies’ rotation is in the top 10 across Major League Baseball in ERA, FIP, SIERA, and WPA while also pitching the sixth most innings overall. Also, for those that still hold stock in this particular statistic, Philadelphia’s rotation is FIRST in WAR.

Zack Wheeler and Aaron Nola have been a major part of the Phillies’ success this season. Nola leads the rotation in IP, strikeouts, and WHIP while Wheeler leads in wins ERA, and K/9. Looking beyond the two aces, Kyle Gibson, Zach Eflin, and Ranger Suarez have all been serviceable on the year, with ERA’s ranging from 4.07 to 4.37. Gibson and Suarez have both earned positive win-loss records.

Put it all together and the Phillies’ rotation has, at worse, kept the Phillies in each game while, at best, running away with the victory. So how does the rotation have a problem? I’m glad you asked! Let’s talk short-term briefly before getting into the long-term issue.

With the return of Suarez from his injury, the Phillies have four of their five starters healthy to start the second half. But it was not like that just a week ago. Rewind to the Toronto series, the Phillies traveled to the Blue Jays with only two of their starters as Suarez and Eflin were injured and Gibson was placed on the restricted list.

While injuries and other factors can come into play all the time throughout the year, the Phillies do not have the available depth to handle such situations. Sure, Mick Abel, Andrew Painter, and Hans Crouse are on the rise, but they are not ready yet. And while Bailey Falter and Cristopher Sanchez do their best in every outing they are called upon, they will not be sufficient over a long stretch on a team in the playoff hunt.

If Zach Eflin returns from his knee injury quickly, and if the Phillies have no additional pitcher injuries, then what they currently have will be sufficient for a deep playoff run. But that is not practical nor is it advisable to trust that no issues will emerge. Therefore, the Phillies need to look to acquire an additional starting pitcher at the trade deadline.

That, however, is not the major issue facing the Phillies. The major rotation issue is one that will not even come to pass until the offseason, but it is one that Dave Dombrowski would be wise to address now. The problem?

Kyle Gibson and Zach Eflin will be free agents, opening up two crucial spots in the rotation. Gibson is in the final year of a three-year contract that he originally signed with the Texas Rangers. Earning $7 million this year, the 34-year-old will look to cash in on what could be his final significant bout of free agency.

“Wait Shaun, I though you said he was going to be a free agent?”

Bring in the thought as well that Ranger Suarez would likely best serve the Phillies from the bullpen, and one could make the argument that the Phillies need to fill three out of five positions in the rotation next year.

What the Phillies Should Do About This

As the Phillies look to make a splash at the trade deadline, they can fix both short-term and long-term issues by trading for a reliable pitcher who is under contract for the next few years. As my colleague Matt Watson recently mentioned, Luis Castillo is one such option to fit the bill. Castillo’s reputation precedes him and he does have one more year of arbitration under his belt before reaching free agency in 2024. If the Nationals are going to sell on Juan Soto, what is to stop them from moving Stephen Strasburg as well?

The Phillies will likely need to move a couple of top prospects to make a move like this work. Perhaps a Logan O’Hoppe mixed in with one of the Phillies’ upcoming arms should do the trick depending on the deal.

Additionally, the Phillies have been $50-70 million coming off the books next year with several free agents hitting the market including Didi Gregorius.

The Phillies will need to put that money to good work in the offseason to sign one or two arms for the rotation. Now, while Gibson and Eflin could both return on negotiated deals, the Phillies should not limit themselves. Noah Syndergaard and David Price are the two big names hitting the market, but there are several other intriguing options that could make a splash in Philly such as Sean Manaea, Chris Bassitt, Corey Kluber, or Mike Clevinger.

Regardless as to which way Dombrowski decides to tackle this particular problem, he will still have to tackle it. If the Phillies do so correctly, they can plan for the future while also securing their best chance possible to make it back to the postseason this year.