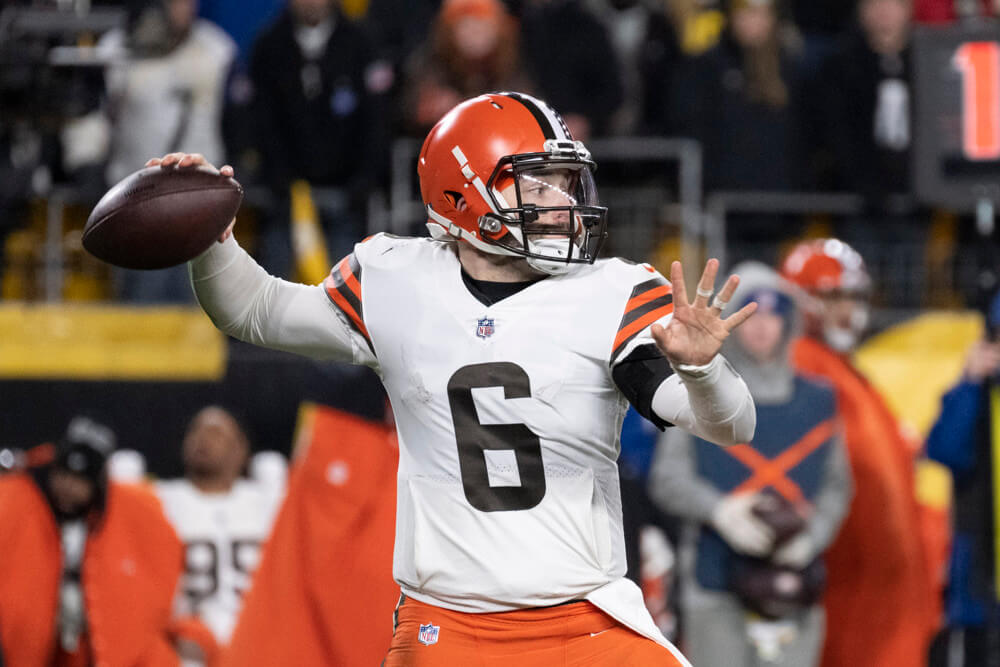 PITTSBURGH, PA – JANUARY 03: Cleveland Browns quarterback Baker Mayfield (6) looks deep in the end zone for a receiver in the fourth quarter during the game between the Pittsburgh Steelers and the Cleveland Browns on January 03, 2022 at Heinz Field in Pittsburgh, PA. (Photo by Shelley Lipton/Icon Sportswire)

Baker Mayfield has been traded to the Carolina Panthers for a conditional fifth-round pick. While the Browns have been in the offseason headlines for all the wrong reasons surrounding the quarterback position, their trade of the former first overall pick has sent ripple effects across the NFL. While one can question how the Eagles are impacted in a trade that is not in their own division, Baker Mayfield coming to the NFC South impacts Philadelphia in more ways than one.

Drew Brees and Sean Payton are both gone from the Saints. In their place, Dennis Allen and Jameis Winston will try and pick off where the future Hall of Famers left off.

New Orleans had a pretty solid draft. The selections of Chris Olave and Trevor Penning were much needed to help bolster an offense weak on talent. But with Alvin Kamara reportedly waiting on a six-week suspension from the league, the Saints could very well struggle out of the gate.

For New Orleans, they gave away a 2023 first round pick to Philadelphia and are expected to be a team that competes for a top playoff spot with the Eagles.

The issue? With Baker Mayfield in Carolina, the Panthers now have a significant upgrade at quarterback with a plethora of weapons on the roster. Carolina is much better than their 5-12 from last season and can certainly compete for a playoff spot, and challenge New Orleans at the thick of the NFC South race.

Any additional competition to New Orleans is good for Philadelphia. If Carolina is able to beat New Orleans once, that could not just keep the Saints out of the playoffs (like last season), but it could also give Philadelphia a higher first-round pick.

How could the NFC East be impacted by a Panthers quarterback trade? Simple: the New York Giants are scheduled to face Carolina in Week 2 as a part of the league schedule that sees last-place teams facing one another

While the Giants can be seen as a year or two away from completing a rebuild, Brian Daboll and Joe Schoen have shown competency already in building the roster.

New York could be a lot better than people may think.

Therefore, facing good quarterbacks will only help emphasize the weakness in the secondary New York has. Analysts can argue how good of a quarterback Mayfield is, but he’s the first Browns quarterback to win a playoff game in over 20 years. That alone is beyond impressive. He is an instant upgrade to Sam Darnold and can help Carolina immediately.

While the Rams, Buccaneers, and Packers can be seen as almost sure-fire locks to make it back to the postseason, there are four other playoff spots available and open to many of the NFC teams vying for position.

The Eagles, Cowboys, Cardinals, 49ers, Saints, Vikings are all expected to challenge for the wild card and division spots.

Carolina is a team that struggled in 2021 but has a lot of young talent. DJ Moore and Christian McCaffrey are excellent offensive weapons and the defensive side has solid targets as well. Adding Mayfield vaults Carolina into the playoff hopefuls an muddies up the later seeds of the NFC playoffs.

While playing Tampa Bay and New Orleans four times a season won’t help their chances, Baker Mayfield is more than capable of leading a young Panthers team to the playoffs.

While the trade with Cleveland has a lot to like when it comes to Philadelphia’s future plans, it does bring some concern as well.