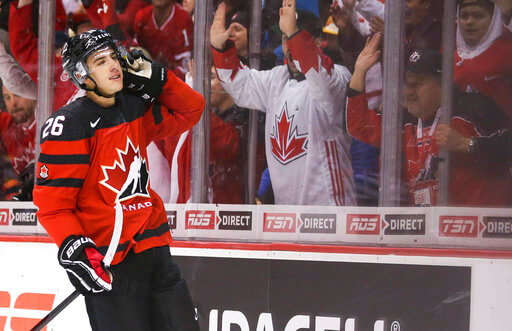 The Sault Ste. Marie Greyhounds saw their playoff run come to an end this past Sunday with a 5-0 defeat at the hands of the Saginaw Spirit. The 4-2 series loss not only signaled the end to the Greyhounds season but also the OHL career of Flyers Prospect Morgan Frost.

Sault Ste. Marie selected Frost with the 81st-overall pick in the 2015 OHL Priority Selection. Prior to the OHL, Frost played for the Barrie Colts Minor Midget AAA team of the ETAMMHL.

Frost’s rookie season with the Greyhounds was a modest one. The young forward played in 65 games and recorded seven goals and 20 assists. His sophomore year saw drastic improvements to both his overall game and his numbers. Frost’s goal total increased by 13 to 20 and his assist number jumped to 42. In all, Frost recorded 62 points in 67 games.

Frost’s 2016-17 performance caught the attention of many scouts. For the most part, his ranking among the different agencies projected him going in the second round of the 2017 NHL Entry Draft. However, Ron Hextall saw something special in the kid and used the first-round pick he acquired from St. Louis (27th-overall) to bring Frost to Philadelphia.

The 2017-18 OHL season made Hextall look like a genius and Morgan Frost became a household name among Flyers fans. Frost straight-up caught fire in his third season with Sault Ste. Marie, almost doubling his point total from the season before. In 67 regular season games, Morgan Frost recorded 42 goals and 70 assists. He also led the entire OHL in plus-minus with a +70. His postseason performance was just as spectacular with 29 points in 24 games. At the end of it all, Frost was named to the OHL First All-Star Team.

Coming into his final OHL season, Frost could not have been under a larger microscope. After 2017-18’s success, the expectation for Frost to light up the stat sheet again was as high as possible. Luckily, Frost did not disappoint. In just 57 games, Frost almost matched his point total from the season before with 109 points. His 72 assists was the most in the entire league. Frost saw fewer games with the Greyhounds this past season due to the honor of representing his home country of Canada at the World Junior Championships. In five games with Team Canada, Frost posted an impressive four goals and four assists.

The OHL playoffs may have been shorter for the Greyhounds then they would have liked, however, it was still a successful showing from Frost. In 11 games, the promising Flyers prospect recorded seven goals and 11 assists.

What’s Next for Morgan Frost?

Morgan Frost leaves the OHL and Sault Ste. Marie as arguably the top prospect in the Philadelphia Flyers farm system. He will be given every opportunity to make the NHL roster out of training camp instead of being assigned to Lehigh Valley. Personally, I belive Frost will start the 2019-20 season with the Flyers. He has all the tools necessary to transform into an effective top-six forward for the orange and black. Of course, Frost playing in Philadelphia depends a lot on the moves Chuck Fletcher makes this offseason. Still, do not be shocked if he skips the AHL and is a rookie in the National Hockey League next year.